My first morning in Yerevan was a lazy morning with sleep recovering from my long flight, but it wasn't to stay that way for long! After getting up, as Ruzan warned, I avoided banging my head on the bathroom roof and used the shower (Figure 1), which although it was a bit rustique (spelled that way to imply something artisan, that's good) was perfectly adequate. The shower, while it looked a bit primitive was actually totally functional, had excellent water pressure, was hot (although I was told that the hot water only came on at 7 when I tried using it really early) and if anything worked better as a shower than the showers at the hospital gym, even if I was a bit wary of standing on the bare concrete floor. After getting up, I headed upstairs for breakfast, which was to be my first experience of Armenian breakfast, home cooking and hospitality. 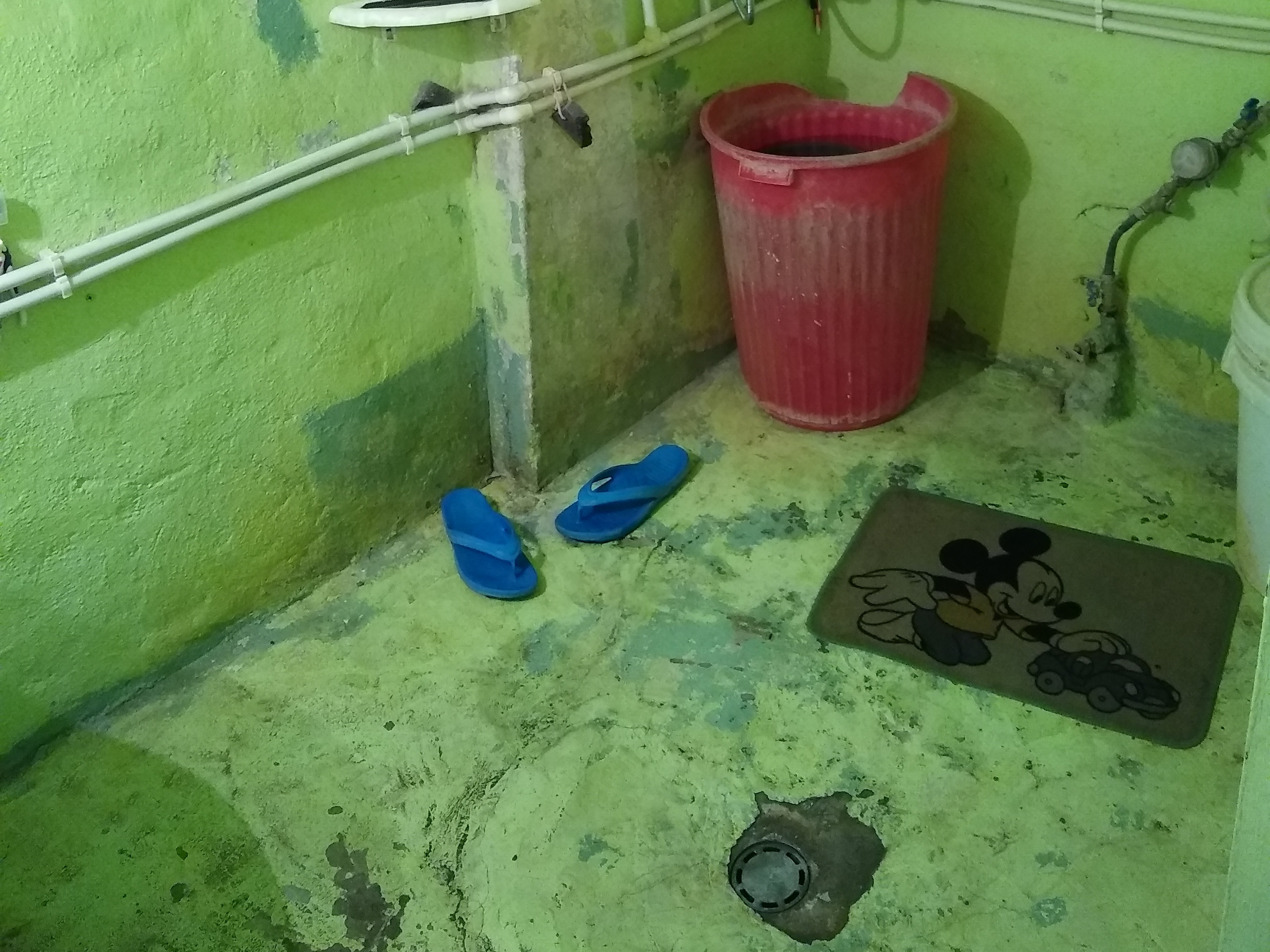 Figure 1: The shower at my accommodation in Armenia. Although it looked quite primitive, the shower had good water pressure, was warm enough (provided the hot water was on), and had ample facilities for washing in the morning. I did have to be careful of the low ceiling of the door coming in though.

This was not a bowl of cereal or some toast, this was something special. It was a vast array of foods that Ruzan had spread on the table in front of me (Figure 2), more than I could possibly eat. England has an eating tradition where one is supposed to eat everything that is served to them. Armenia on the other hand has the opposite tradition, a large amount of food is served and guests are expected to eat as much of it as they can. There were two different types of breads (a very thin flatbread called lavash, and a thicker bread leavened bread called matnakash, which was very nice). There were preserved fruits, plums and apricots to be precise which Ruzan had made herself which were very nice, honey, and a strange (but delicious) substance that Ruzan called "chocolate". It wasn't like any chocolate I knew, it was like a sliceable chocolate spread, or a very thick chocolate ganache. I discovered the best way of eating this was to take a slice, put a preserved fruit on it and wrap a piece of lavash around it. There were also fresh fruits which Ruzan was keen for me to try. Unlike the preserved fruits, I’m not a big eater of fresh fruits, but the grapes I got a taste for, they were very nice and unexpectedly they had large crunchy seeds in them which I was (and apparently other Armenians were) happy to just eat whole with the rest of the grape! 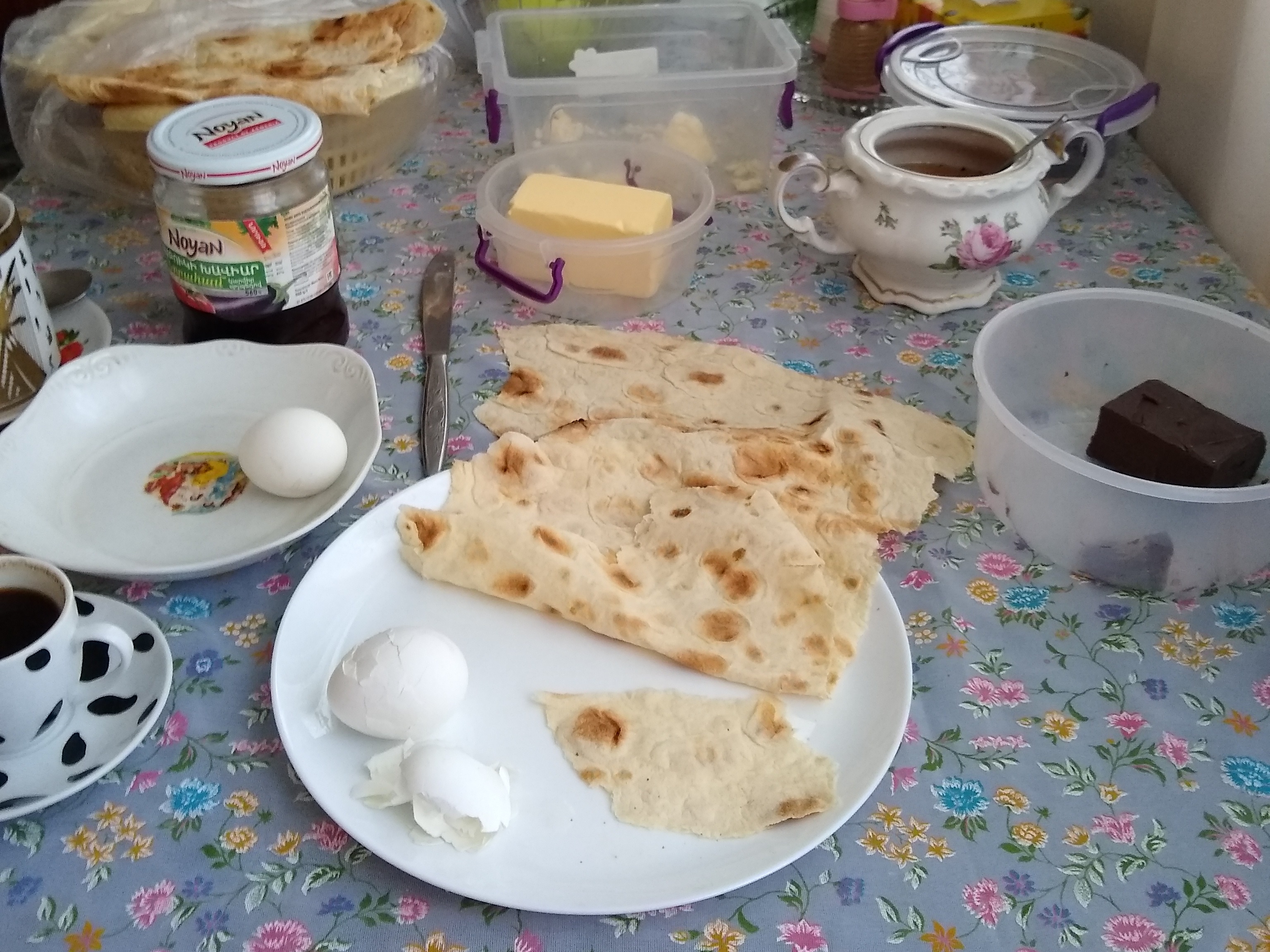 Figure 2: An Armenian breakfast table. Ruzan served me eggs regularly, and there were also lots of other dishes available, including fruit preserves, cheese, and chocolate (which was like a sliceable chocolate spread) all served with lavash bread, along with tea and coffee.

Ruzan and I looked at each other, as without a common language we were unable to communicate. Staring is a normal custom in Armenian culture, which is something you just have to get used to if you come from a culture where this is considered intimidating. This was something I also noticed on the Metro, as I am quite obviously not Armenian I stood out somewhat in this ethnically homogenous country, but people were very welcoming if talked to them or needed any help.

After I'd finished at breakfast it was time for my day exploring. Despite no shared language, Ruzan was very clear what my day would involve. After finishing breakfast and putting my shoes on, I was directed towards the front door. "Du gnum es Qarhaq" (you go to city) she said as she gestured in the general direction of the city centre, or rather the Metro station, Barekamutyan. Ruzan was very clear that I wasn't here to sit in the house doing nothing; I was here to explore Armenia! So of course, off I went to central Yerevan, to see what there is to see there!

After reaching Barekamutyun Station, or at least the stairway to get into the station complex, I had my first occasion of getting lost that day. Barekamutyun has an interesting layout, the station is under a complex road intersection, and has separate entrances at each sidewalk, thus it is also a pedestrian underpass linking the sidewalks for the roads around the junction. Inside the station complex was a shopping mall with various small stores selling a wide range of different products, while walking around the shopping area which was a long corridor I realized that I had passed the same store selling the same whale net tights as I had previously and realized that the mall was a circular corridor and I had walked all the way around! Oh dear that was silly of me! Fortunately it's turned out that Barekamutyun station was a very short walk from the stairway from my homestay, and I could find it easily by looking for the khorovats stall that is adjacent to it and taking the corridor to the right of it.

Taking public transport in Yerevan and the surrounding areas is quite simple. Any journey on a single mode of public transport costs 100 dram (about 25 cents). To pay bus or marshrutka (minibus) fares, you pay the driver at the end of the journey in cash, but to pay for metro fares you buy tokens from the counter and put one of these into the barriers at the entrance to the station. So after getting some tokens for the metro, I entered the metro station and took the escalator down to the platforms. 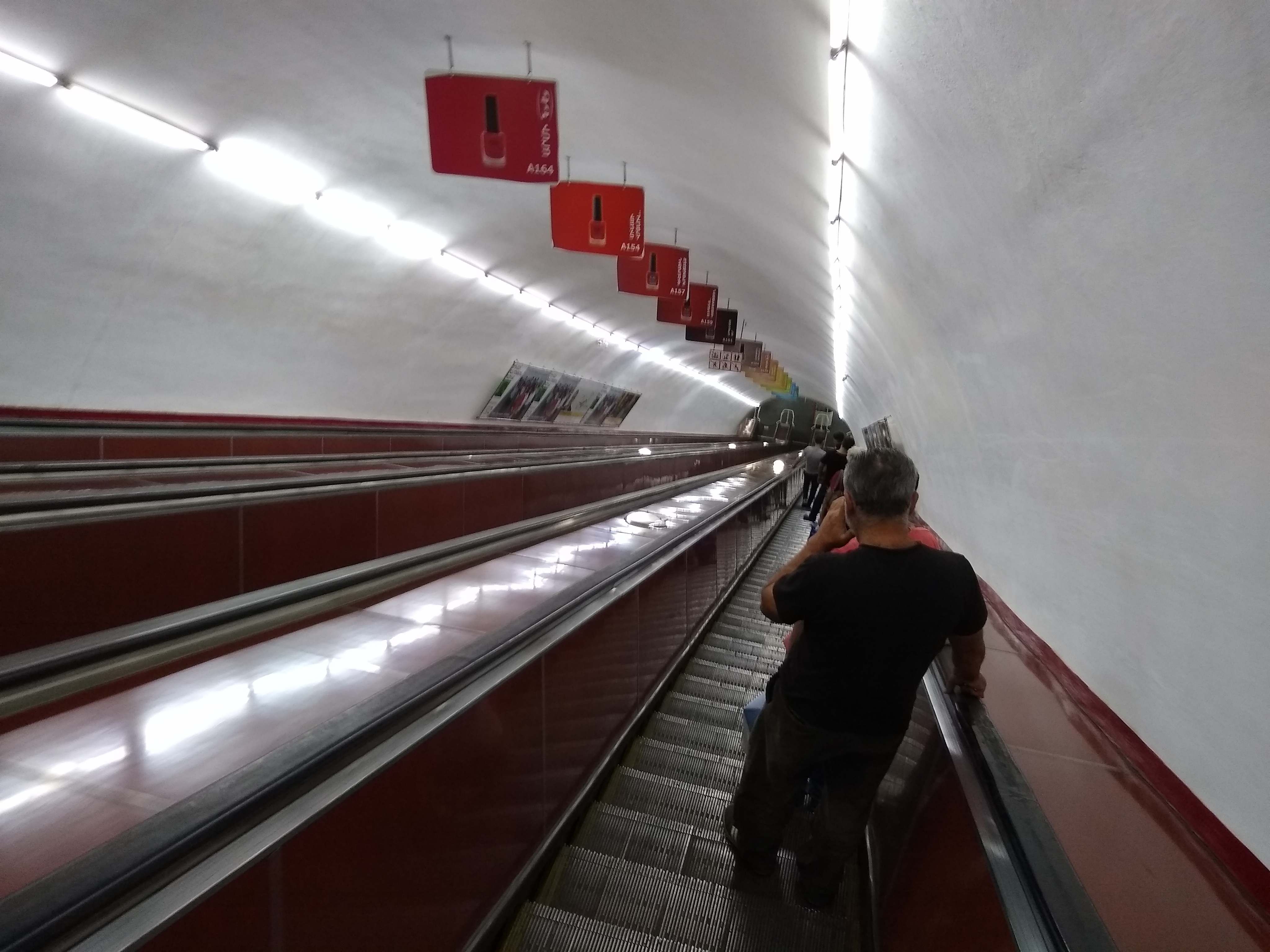 Figure 3: The escalator down into Barekamutyun metro station on my first morning. This was the longest and steepest escalator I think I have seen, and was explained by the fact that the Barekamutyun neighbourhood was itself on top of a steep hill.

The first thing that struck me about Barekamutyun station was how steep and long the escalator was (Figure 3), the platforms at this station were very deep underground! This I later discovered was due to Barekamutyun being on a hill and other stations had platforms much closer to the surface. The Yerevan Metro also only has one line and ten stations, so is quite small compared to the Toronto, London, or Paris metro systems. Another interesting feature of the Yerevan Metro is that the stations are ornately decorated. Barekamutyun station is decorated showing countries which recognize the Armenian genocide (Figure 4), with a map of countries and also their flags, of which Canada is included, as Canada recognized the Armenian genocide in 2004. 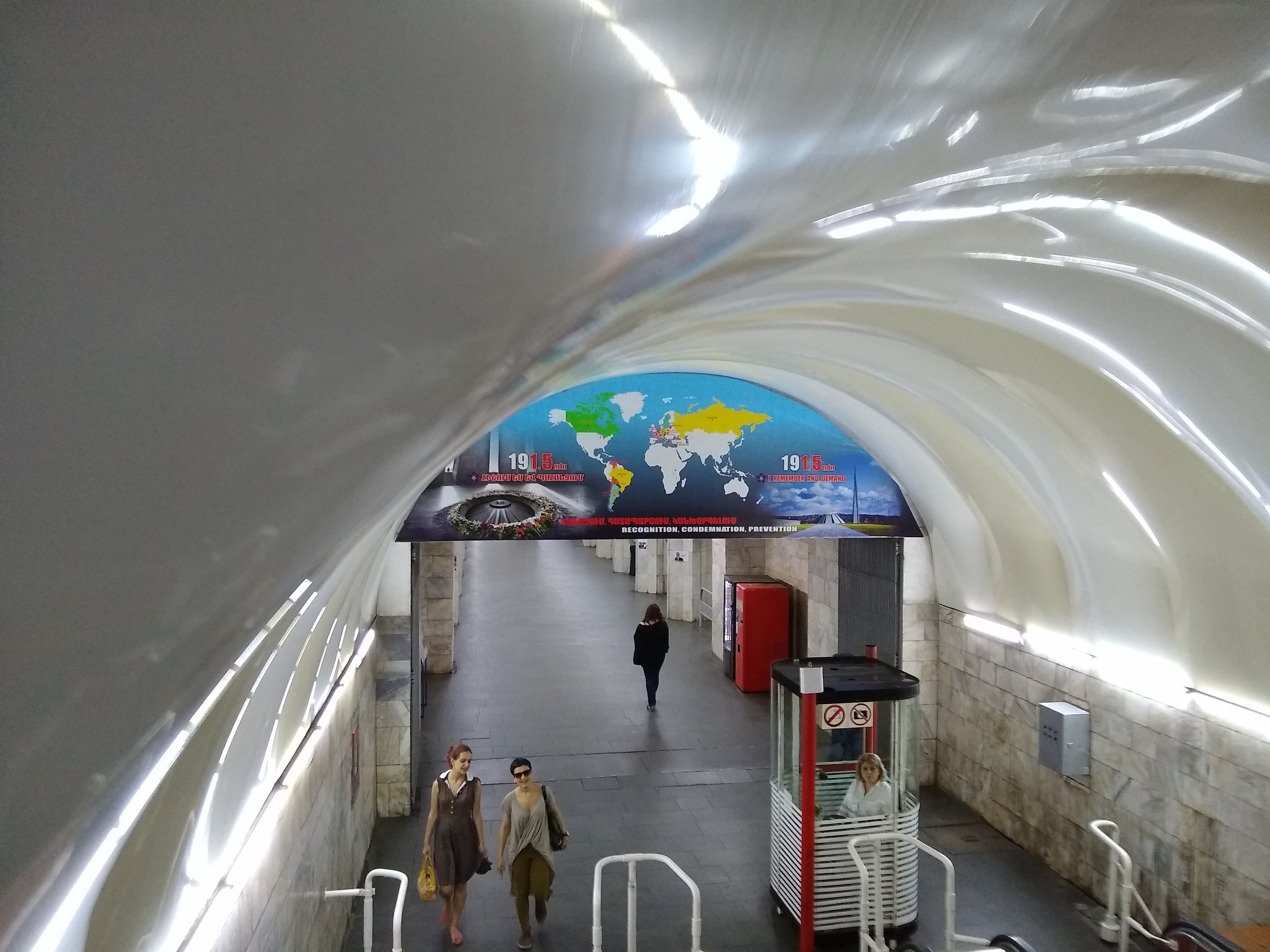 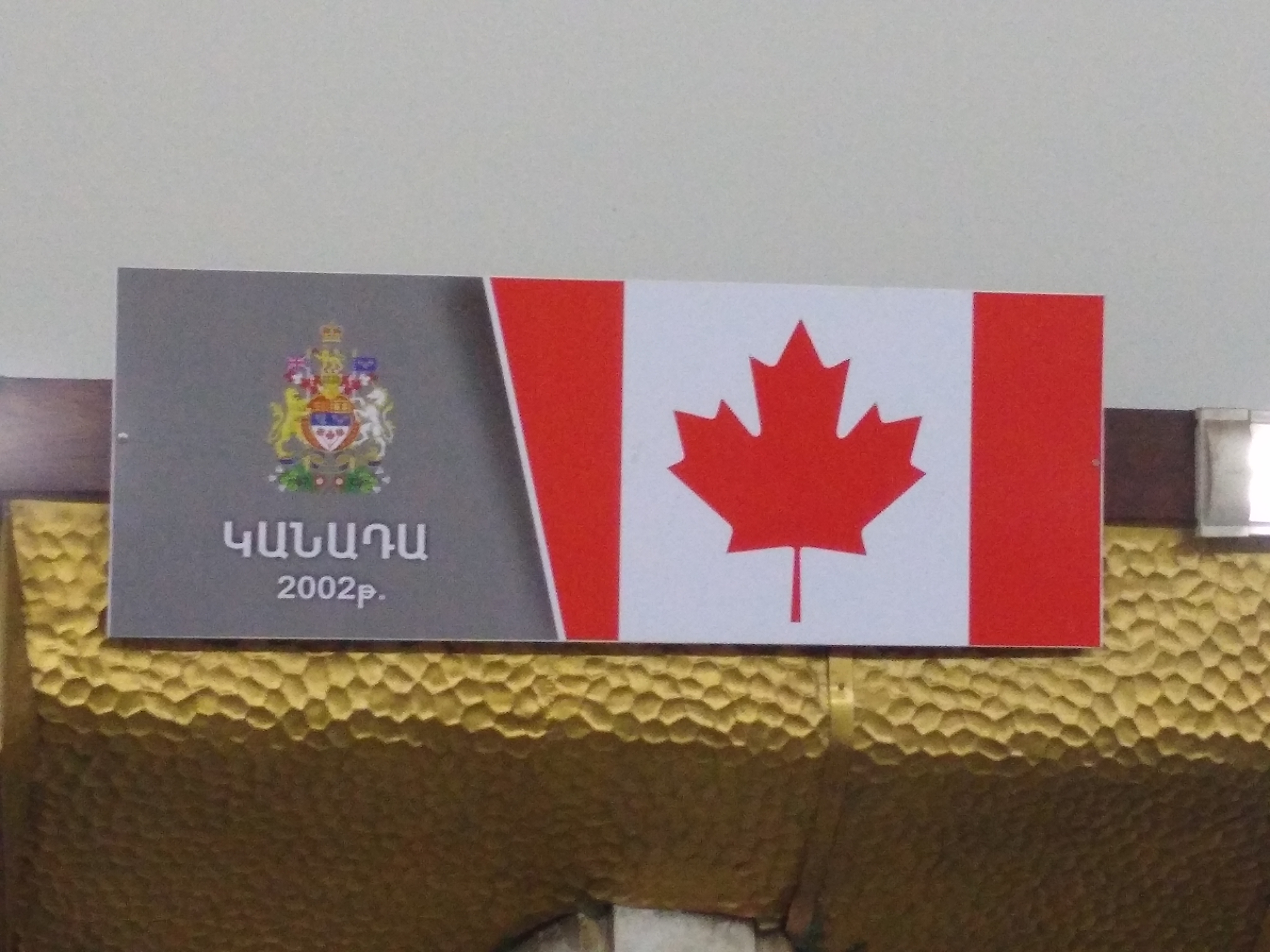 Having looked at the journey in advance before coming in Armenia, I had in my head that I needed to take two stops to get to Republic Square. It turned out I got that wrong, and Republic Square was actually the third stop from Barekamutyun and I'd got off the Metro at Yeritasardakan instead! Fortunately I found is a nice Yerevan and fairly easy city to walk around, so the mistake became a perfect opportunity to do some unplanned exploring in a part of Yerevan I further from Republic Square I hadn’t intended to visit this day!

Armenia celebrates the quality of its water. Consequently water fountains are a widespread feature in Yerevan, with both the ornamental sort, and the drinking fountain sort being a common sight on the streets of Yerevan (Figure 5). The drinking water from the pulpulaks is good quality, and I drank a lot of this during my time in Armenia, and it was particularly useful as it allowed me to top up my water bottle while I was exploring. I have to drink a lot of water due to a kidney condition, as especially as the weather was often hot and dry, it was very useful infrastructure for staying hydrated, plus it was a great way of reducing plastic water bottle usage. 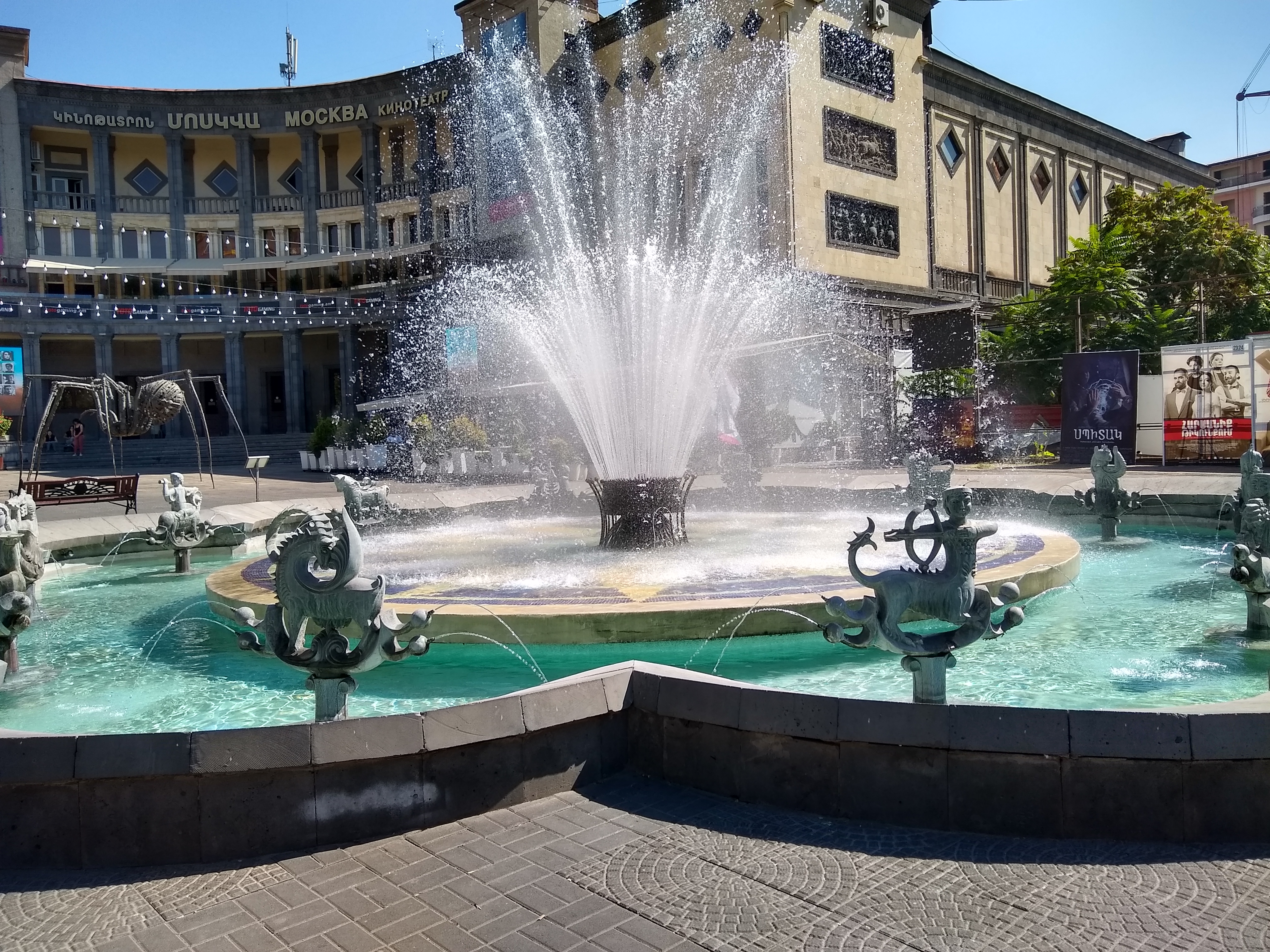 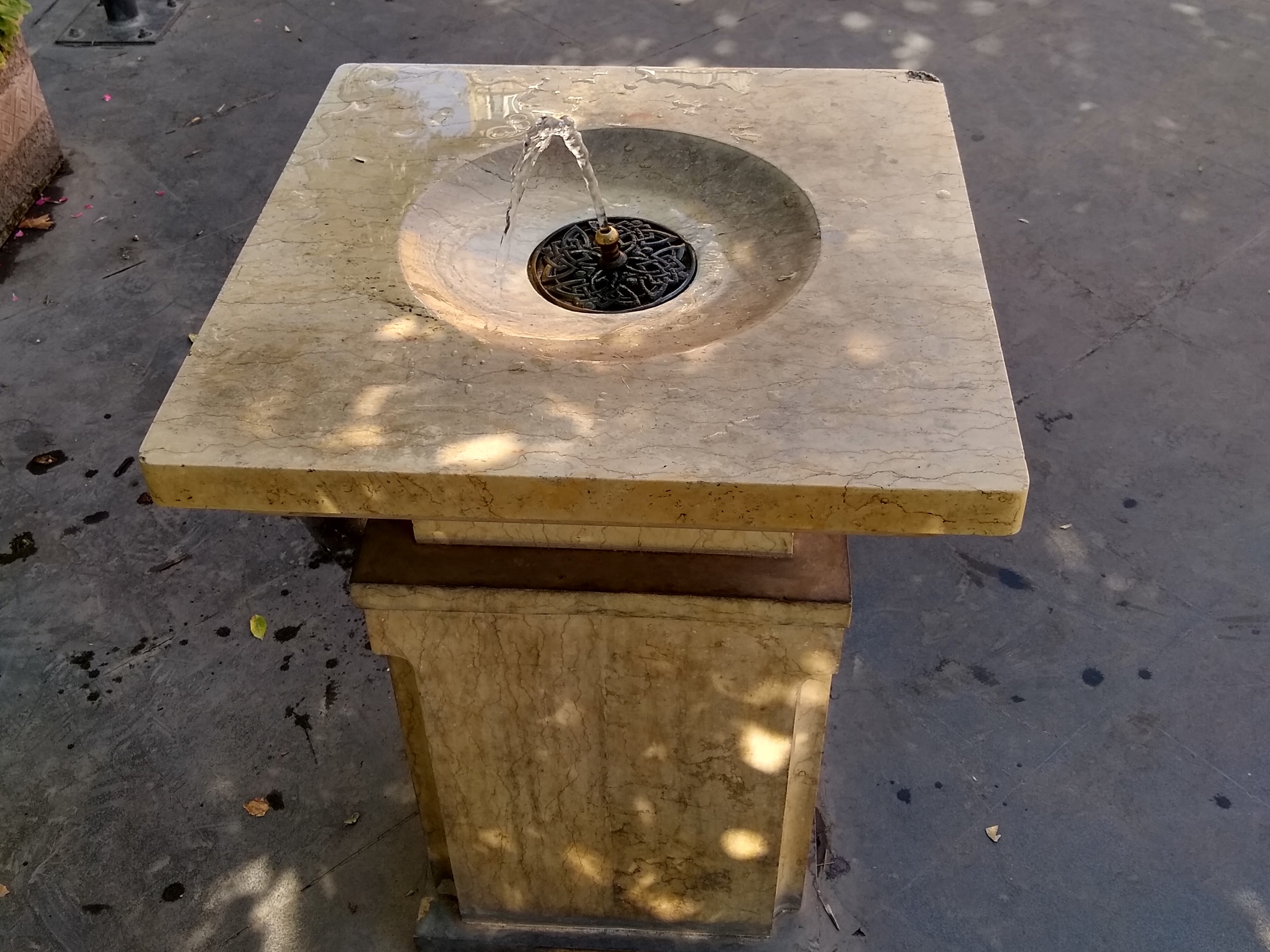 Figure 5: Water is a strong part of the Armenian cultural identity and water fountains are a common sight in Yerevan. Both the ornamental form (left) and the functional form known as pulpulaks (right) are widespread in Yerevan, and very useful for drinking while out and about and filling water bottles. The water from the pulpulaks is free, tasty and safe to drink, and in the summer where is a festival known as Vardavar, which is essentially a nationwide water fight!

I walked along Abovyan Street to reach Republic Square. Along with Nalbandyan Street, this is one of the main streets that stretches from the North East of Yerevan, towards Republic Square forming a crescent in the city centre where the streets meet. When I reached Republic Square I was greeted by a beautiful sight. At the square is a large pulpulak, and the Singing Fountain (Figure 6). Adjacent to the pulpulak was also an ice cream stall selling soft serve ice cream. There was I later discovered a significantly better ice cream store further up on Abovyan Street, however, this ice cream on Republic Square stall sold entirely delicious ice creams for 200 drams! This was an entirely pleasant (and frequent) treat on hot days! 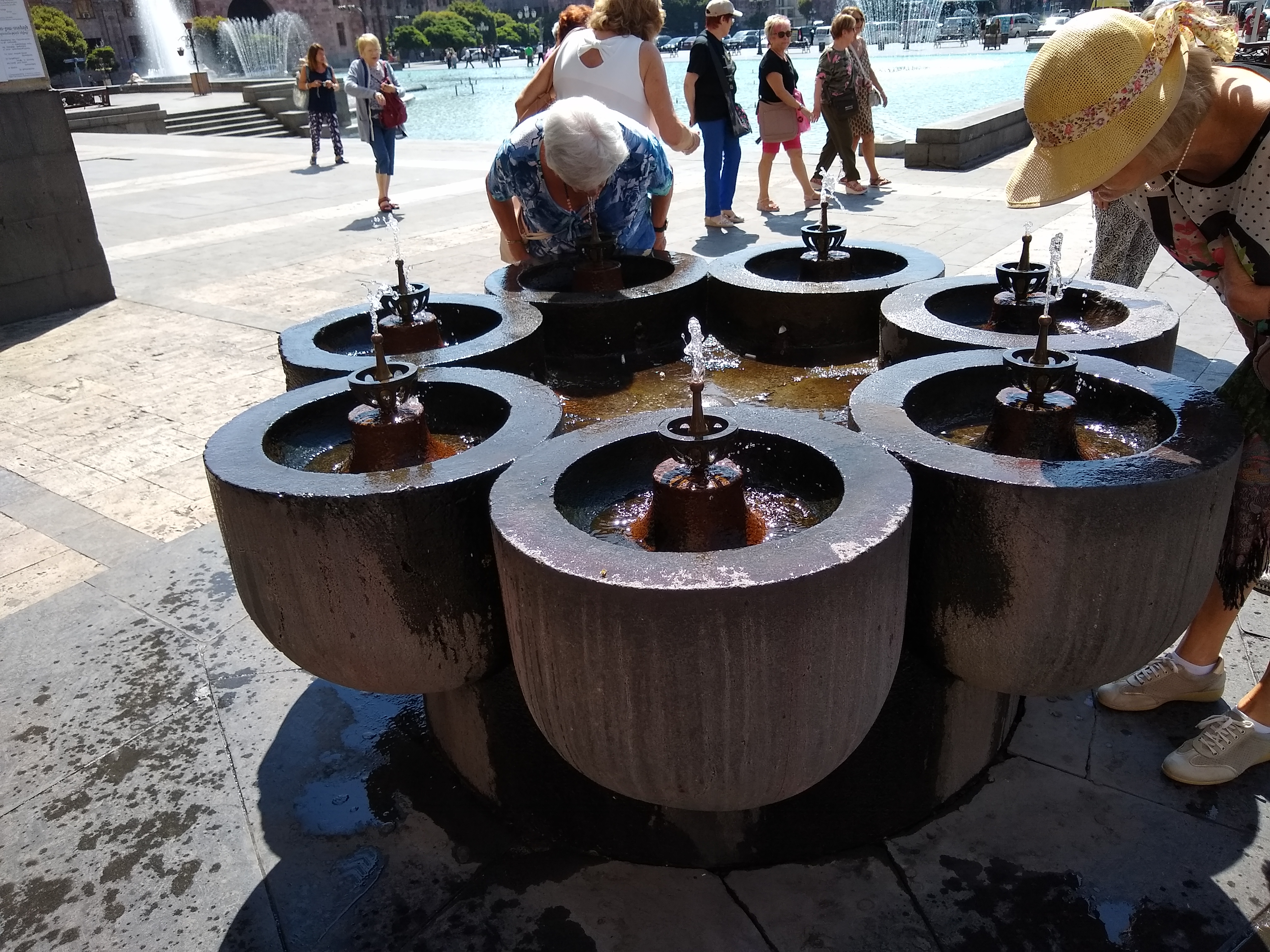 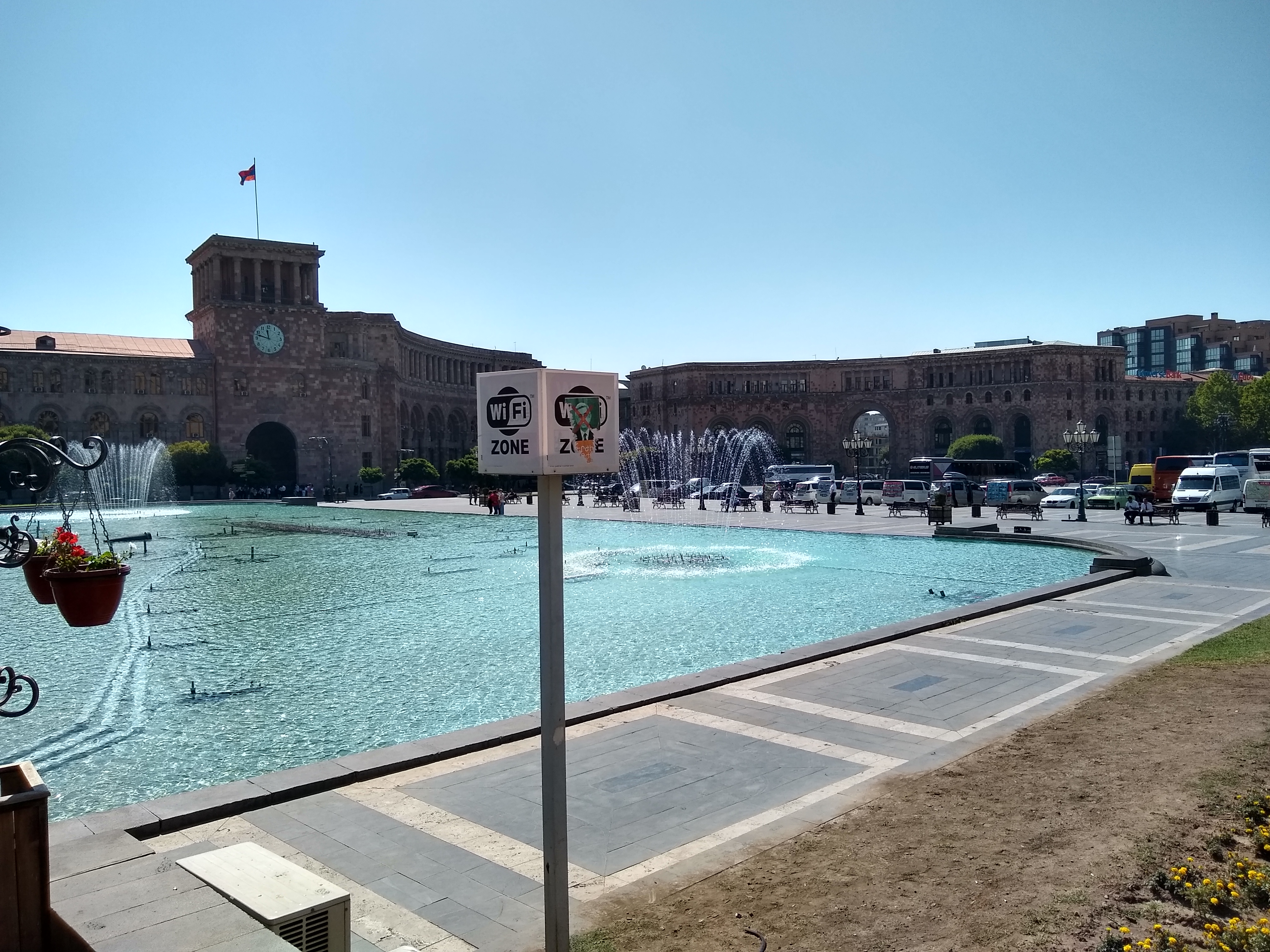 Figure 6: The large pulpulak (left) in the centre of Yerevan at Republic Square (right). Republic Square is the centre of Yerevan, and host to many government buildings, offices, and museums, as well as being central to Yerevan’s road network. Free public WiFi is available in the square, which shows the impressive IT infrastructure available in Yerevan.

Republic Square is where various ministries of the government of the Republic of Armenia are located, except the parliament itself, which is located in the North West of Yerevan near Marshall Baghramyan Station. Republic Square also plays host to various festivities, in the evening residents of Yerevan often gather here for a lights display at the fountain. This was also where the main festivities for Independence Day, La Francophonie and the 2800th anniversary of Yerevan were held during my volunteering service, as well as Vardavar (a nationwide water fight) during the summer. Here was also the site of many of the protests during the 2018 Armenian revolution, and many other protests before and since.

After seeing Republic Square, I took a stroll down Shahumyan Park, a very pretty park surrounded by two avenues with lots of water features and refreshment places, so I stopped for a beer here. The most widespread local beer, Kilikia, is a refreshing pilsner, but I later discovered a dark lager at a restaurant that was also called Kilikia. The widespread use of the brand name Kilikia is an important reference to Armenian history, as there was at one time an Armenian kingdom on the Mediterranean coast known as Kilikian Armenia.

After my beer, I took a trip to the history museum, which is located on Republic Square, where I had a walk through Armenian history. No photographs were allowed unfortunately, but it was interesting seeing how the Armenian civilization survived through occupations of Roman, Persia, Ottoman, and Russian Empires, as well as the Soviet Union but still retained a distinct Armenian character. It was also interesting to see how this Armenian character returned, with some influences from these occupying powers upon the withdrawal of each of these dominating powers. The history museum was vast, and encompassed the history of Armenia from ancient history such as the world’s oldest shoe (found in the Areni-1 cave) to the present day and the 2nd Republic of Armenia.

After that exploring, I decided it was time to go back to my homestay, where Ruzan had prepared a large Armenian feast for me for dinner!