Armenian food is a curious fusion cuisine. First of all there are ancient dishes of Armenian origin that are still enjoyed in modern Armenia. Secondly there are dishes from Ottoman cuisine, which Armenia was long under the occupation of. These dishes were taken with the Armenian diaspora to other countries and in some cases combined with local cuisines where Armenians found new homes and were later brought back to modern Armenia as members of the diaspora started returning to Armenia. Thirdly there are dishes from the former USSR, which Armenia was a part of during the 20th century. Due to cultural exchanges between the constituent republics of the USSR, some of these have also been adopted as part of Armenian cuisine, and adapted with other Armenian recipes to give uniquely Armenian versions of these recipes.

Here are some foods I discovered in Armenia.

First things first, Armenian meal tables are characterised by many plates of different foods which diners all share. Meals are a communal affair in Armenia, with various meat, salads, cheeses, breads (flat bread, lavash, and leavened bread, matnakash both being popular) vegetables, rice and fish dishes served on the table. This particular meal platter was what we ate for lunch on the excursion I took with the Institute of Molecular Biology to Lake Sevan. Lake Sevan being a lake, there was fish served with this, one of which was wrapped in lavash and baked.

No culinary tour of Armenia would be complete without mentioning khash. Khash is a soup made from cows feet, that’s right, cows feet. The feet are boiled for a long time, often overnight, and since cows feet have little if any muscle, but lots of connective tissue, this dissolves into gelatine to make a gelatinous broth. Into this broth garlic is crushed and lavash flatbread is dipped or dried and broken up into. This is a very special ritual meal, and is usually served as a party, the morning after a heavy night’s drinking, and many toasts are made to it. Although Ruzan made this for me to eat for dinner one evening, after she’d warmed me up to the other Armenian delights.

My favourite Armenian food has to be basturma. Basturma is meat, usually beef, but the most celebrated basturma is from camel, that has been salted, dried, and spiced (using a mixture of garlic, paprika, cumin, fenugreek, allspice and pepper) to produce a rich tasting, spicy dried meat. This is served either in thin slices, or it can be chopped from the whole pieces of basturma and used in recipes. It can be eaten by itself, or is often served in sandwiches with eggs, or omelettes. As delicious as basturma is, one side effect of eating basturma is that the next day one’s urine and sweat will smell of the spice mix used to make it! Which is either a delicious reminder of the basturma you ate, or horrific, depending.

Another interesting food to eat in Armenia is harissa. Not to be confused with the Moroccan harissa paste, harissa (pronounced “hareesa”) is made from chicken and wheat grains which have been boiled for hours until they become the consistency of porridge. It is then topped with butter, and can be served with bread (for double carbs!) Harissa was eaten by Armenians during the siege of Musa Ler during the Armenian genocide. It’s a simple dish, but delicious and wholesome. I have also seen vegetarian versions of harissa which omit the chicken and use herbs instead, which are eaten during fasting periods such as Lent.

Speaking of vegetarian dishes and fasting during Lent. Pasuts dolma is vine and cabbage leaves stuffed with a mixture of rice, wheat, beans and nuts. This is a dish traditionally eaten during Lent (in fact, as the restaurant where I ate these they were translated into English as “Lenten dolma”), when many Armenians forgo meat during this time of fasting.

It’s not just vine and cabbage leaves that are stuffed in Armenian cooking, and not only in restaurants where you can find stuffed foods (known as dolma). Ruzan made me these mixed vegetables, stuffed with rice and meat, and instructed me to eat them with my bare hands! Actually, not quite my bare hands, rather I was shown how to wrap the lavash around the grilled vegetable I wanted to it and use the lavash to convey the dolma into my mouth, which was surprisingly not messy eating! 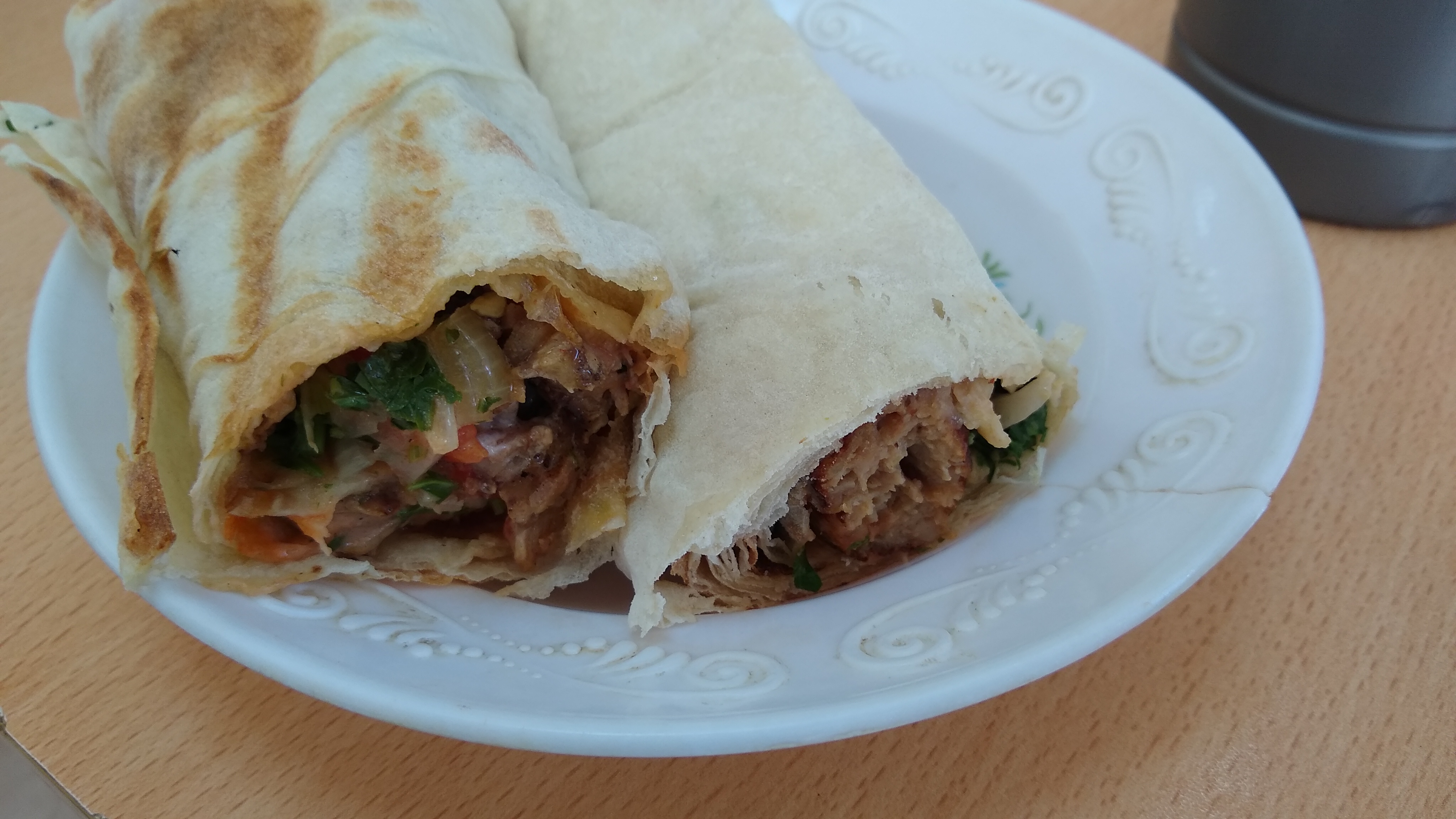 And the most iconic Armenian food is the kebabs, or khoravats as they are called in Armenian. These are grilled meat, served with vegetables and wrapped in lavash flatbread. These are the most delicious kebabs, like shish kebabs, only even more exceptionally delicious. Different varieties of meat can be found in different khorovats sold by different vendors, as can the toppings vary, but one thing that distinguishes the Armenian khorovats from other kebabs is the use of lavash flatbread, which makes an excellent wrap for the grilled meats and vegetables.

In the same tradition as the krorovats kebabs, parda is an organ meat kebab. This was I think the cheapest item on the menu at Karas that was a decent size meal (or possibly the grilled lung was cheaper). A similar idea to the Greek dish kokoretsi, this was an intestine that had been stuffed with heart and lungs, and baked. It was really delicious, but I really like organ meat.

And speaking of organ meat, this dish is tjvjvik. The first time I ordered it, I pointed at the item on the menu and said ta-ja-va-ja- to which the waitress was delighted and said ahhh! You want chej-vej-vik! And thus I learned how to pronounce it! This is a stew made from organs (in this case lung and heart), peppers and tomatoes. It's a deliciously rich and hearty dish.

I think khamavar is the strangest meat dish I had in Armenia. This is made from beef that had been cubed, boiled, then set in butter, which historically would have helped preserve it. Served cold it is a delicious appetizer on the table. 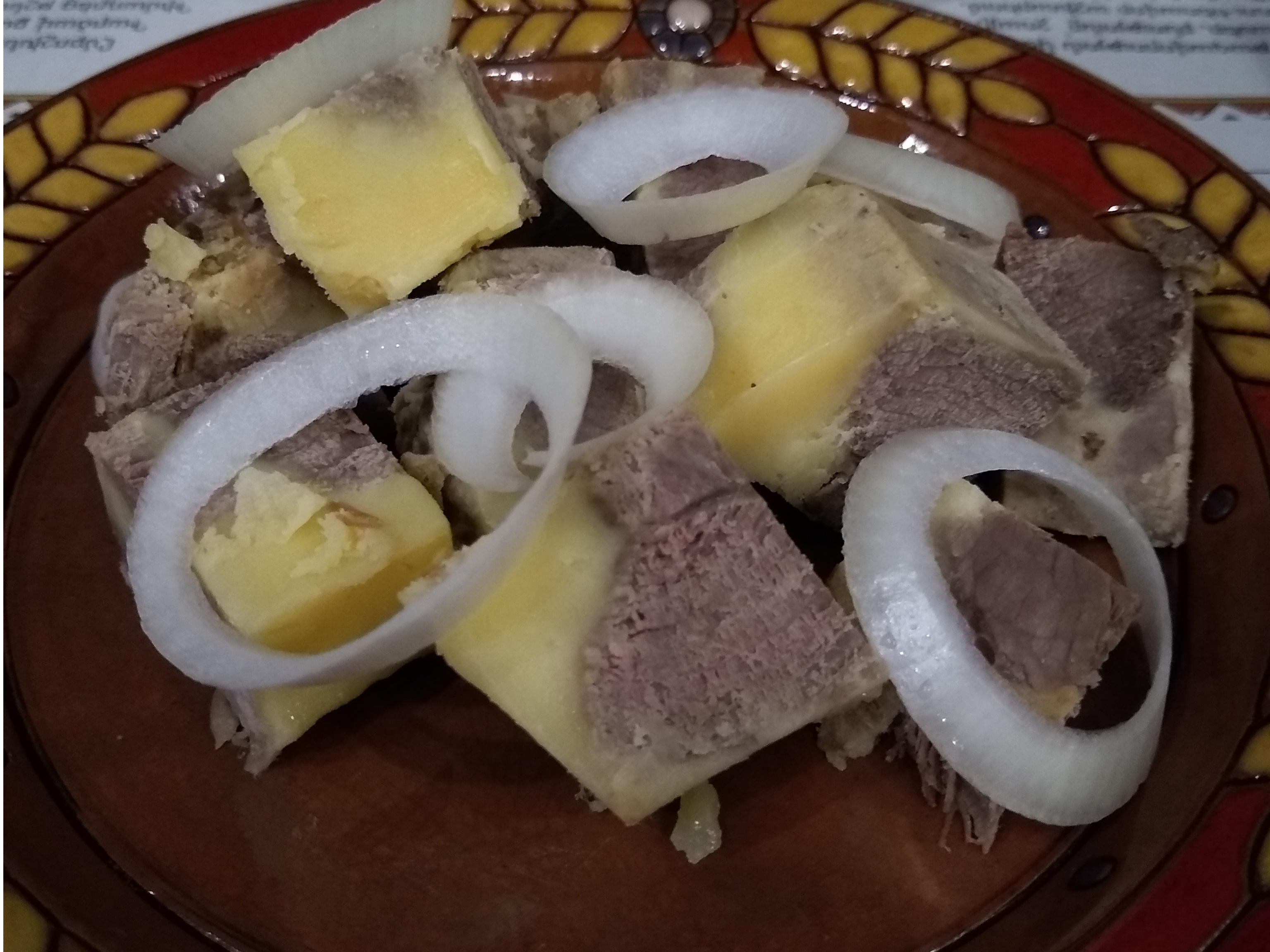 Ishli kufta are stuffed meatballs. The meatball is formed around a stuffing of pine nuts. It is difficult to shape these balls, so unlike much Armenian cooking that makes simple easy to make comfort foods, this is a more complex dish.

Spas is a soup made from yoghurt as part of the broth, along with grains, vegetables, and herbs it is quite an interesting soup. The yoghurt is not overpowering, but gives the base a lightly sour taste, and makes this soup quite an interesting experience to eat. Ruzan made this soup quite a lot for me, along with a chicken soup that she also made. I also had this soup at the Karas restaurant inside a very large loaf of crusty bread, which absorbed a lot of that delicious soupy goodness!

Pickles are a common accompaniment to Armenian dishes and are very popular in Armenia. A wide variety of vegetables are pickled, including cucumbers, green beans, cauliflower, tomatoes, both sweet and chilli peppers, and carrots. These particular pickles were some that Ruzan had made the year before and preserved throughout the winter. One day in the morning she was preparing all of the jars and cucumbers for pickling what would be next year’s batch. These were delicious pickles, quite sharp and crisp, though eating other pickled vegetables available in Armenia was also delicious.

Khachapuri is a Georgian dish, and always when I mention Khachapuri I have to mention that it is Georgian and not Armenian. As such a delicious dish, the Georgians are very proud of it, and will mention wherever it is referred to that's it is a Georgian dish. Such is the deliciousness of this dish, it is also popular in neighboring Armenia! This is a boat shaped bread, into which cheese and egg are baked. The egg often doesn't cook fully, and the raw egg gets absorbed into the freshly baked bread for extra gooey deliciousness. Other fillings can be added which in Armenia often includes basturma, to give an Armenian twist to this delicious and filling Georgian recipe.

A popular Armenian sweet is sweet soujouk. This is walnuts threaded onto a string around which grape or apricot leathers are set. Leathers are a chewy candy made from fruit juice, often set as flat sheets, but in this case they are set around the walnuts on a string in a shape that resembles a sausage. They are a really delicious sweet snack widely available in Armenian supermarkets and at roadsides and other vendors.

Lastly, what to drink; Along with all of the fine wine and brandy that is available in Armenia, there is tan. Tan is a yoghurt based drink, which is often lightly salted, which takes some of the edge off the sourness that derives from the yoghurt. After discovering tan, I started to drink this as opposed to the wine in Karas. It was often served plain, however Ruzan also made it with herbs, including mint and cucumber, and this was a considerably more substantial drink. This serving of tan I bought by accident, when I tried ordering in Armenian the first time and didn't express what size of tan I wanted and I ended up with the largest serving they offered! No problem because it's delicious!