The modern Republic of Armenia (The 2nd Republic of Armenia) became independent from the Soviet Union on 21st September 1991, thus the day is celebrated as Independence Day, and as a statutory holiday in Armenia, it meant I had a day off from my volunteer placements. To enjoy the festivities, I headed from my home stay to Republic Square, which was where most of the celebrations in Yerevan were being held. I saw lots of Armenian flags being waved by people, or painted onto faces, and decorating the attractions in Republic Square, and a large crowd of children chanting “Hayastan” (Armenia) as they walked down Abovyan Street.

For some reason, I decided this day was the perfect day to climb the Cascade monument (Figure 1). Cascade is a bit of a walk from Republic Square, but it would be a good way of spending time before the main festivities began and also a chance to see the parts of Yerevan to the north of Republic Square, especially the area around the Armenian Opera Theatre. After passing this building, and crossing a few more roads, I reached the foot of the great flight of stairs that is Cascade. Cascade is part of the Cafesjian Museum of Art and has many art installations on its various levels. The Cascade is constructed as a steep staircase, the top of which gives visitors a view of the Yerevan skyline from the north. Seeing the skyline of this beautiful and ancient city, which is the epicentre of Armenian culture felt the most appropriate way of spending the holiday. 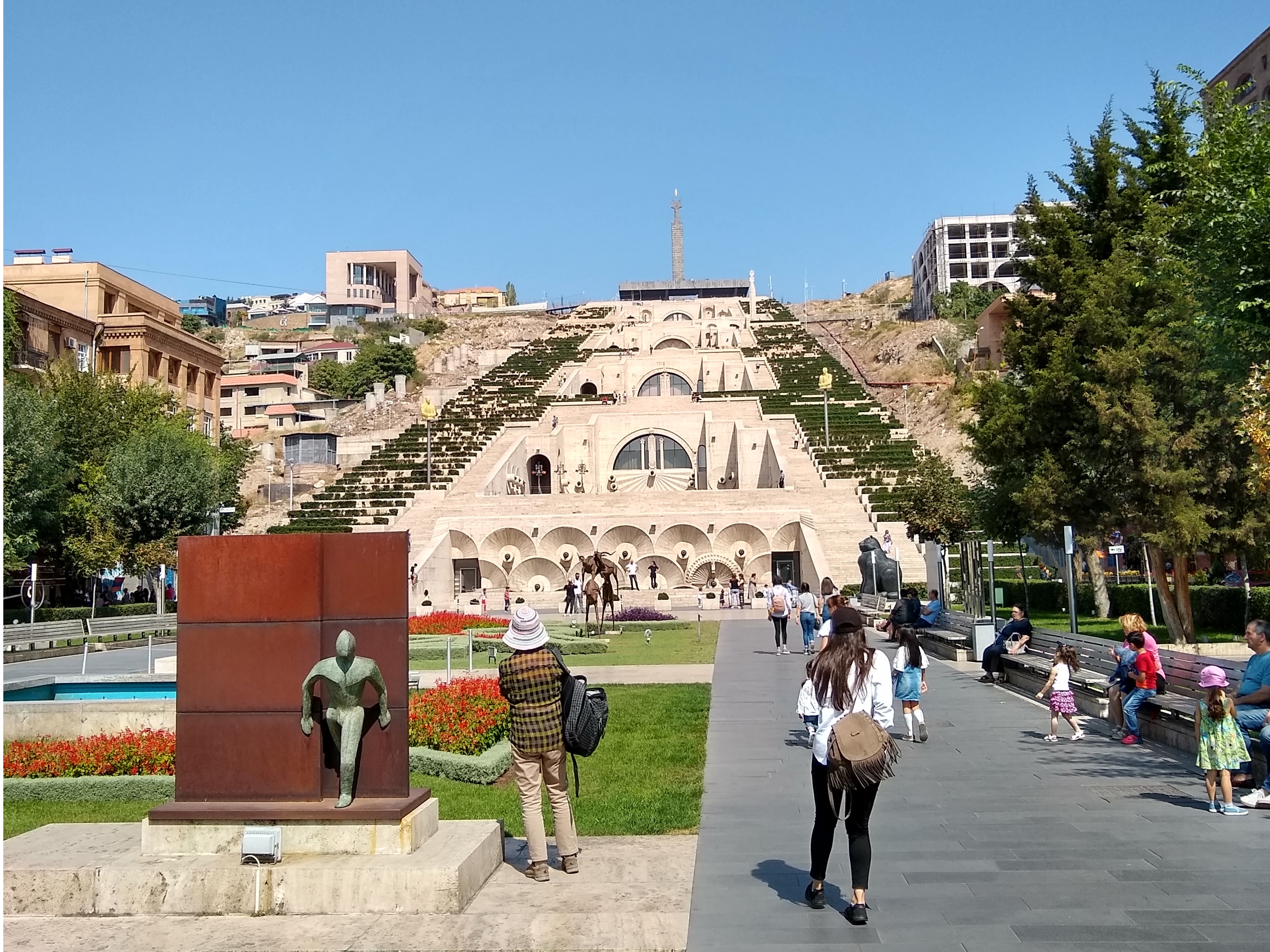 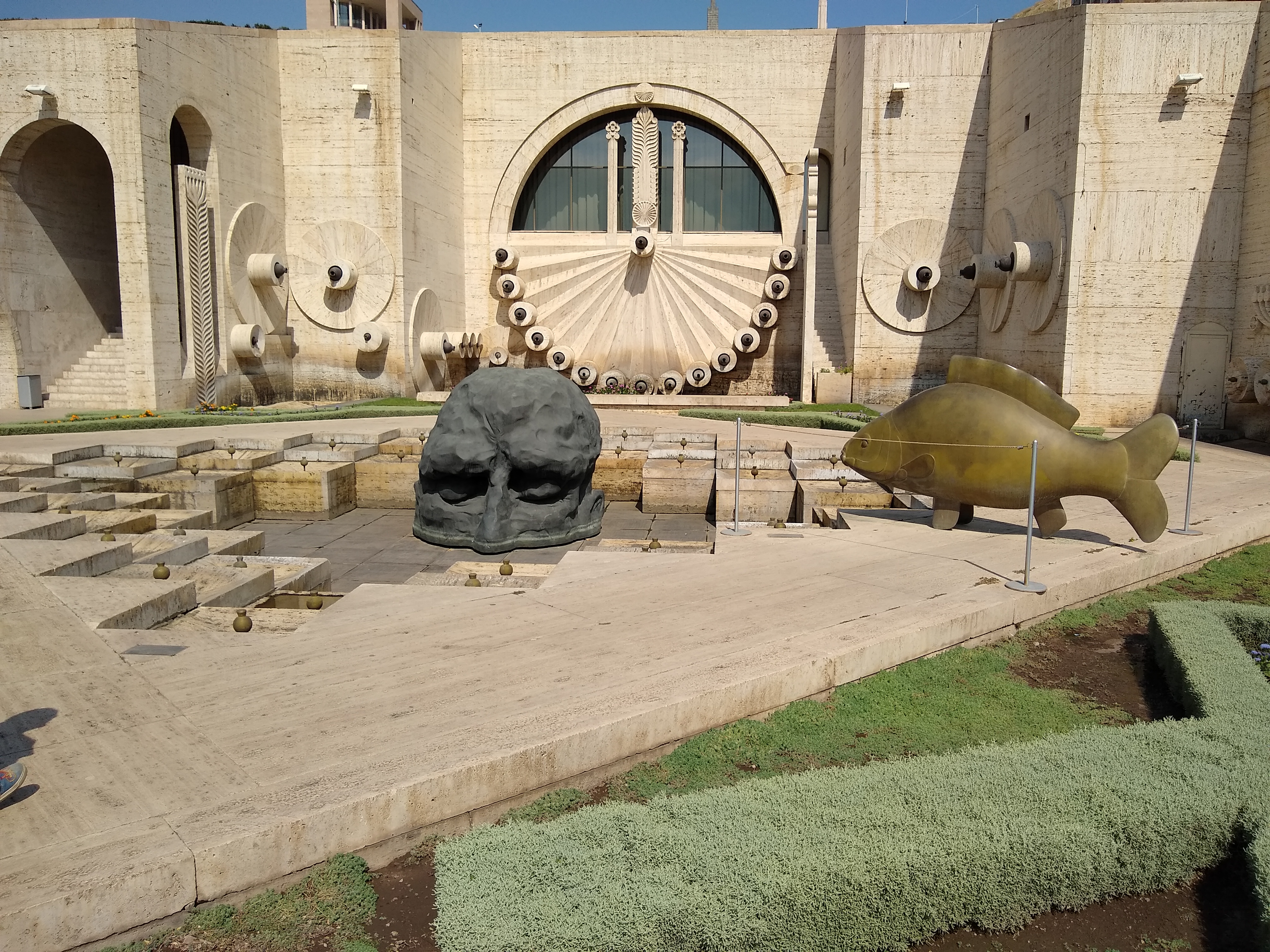 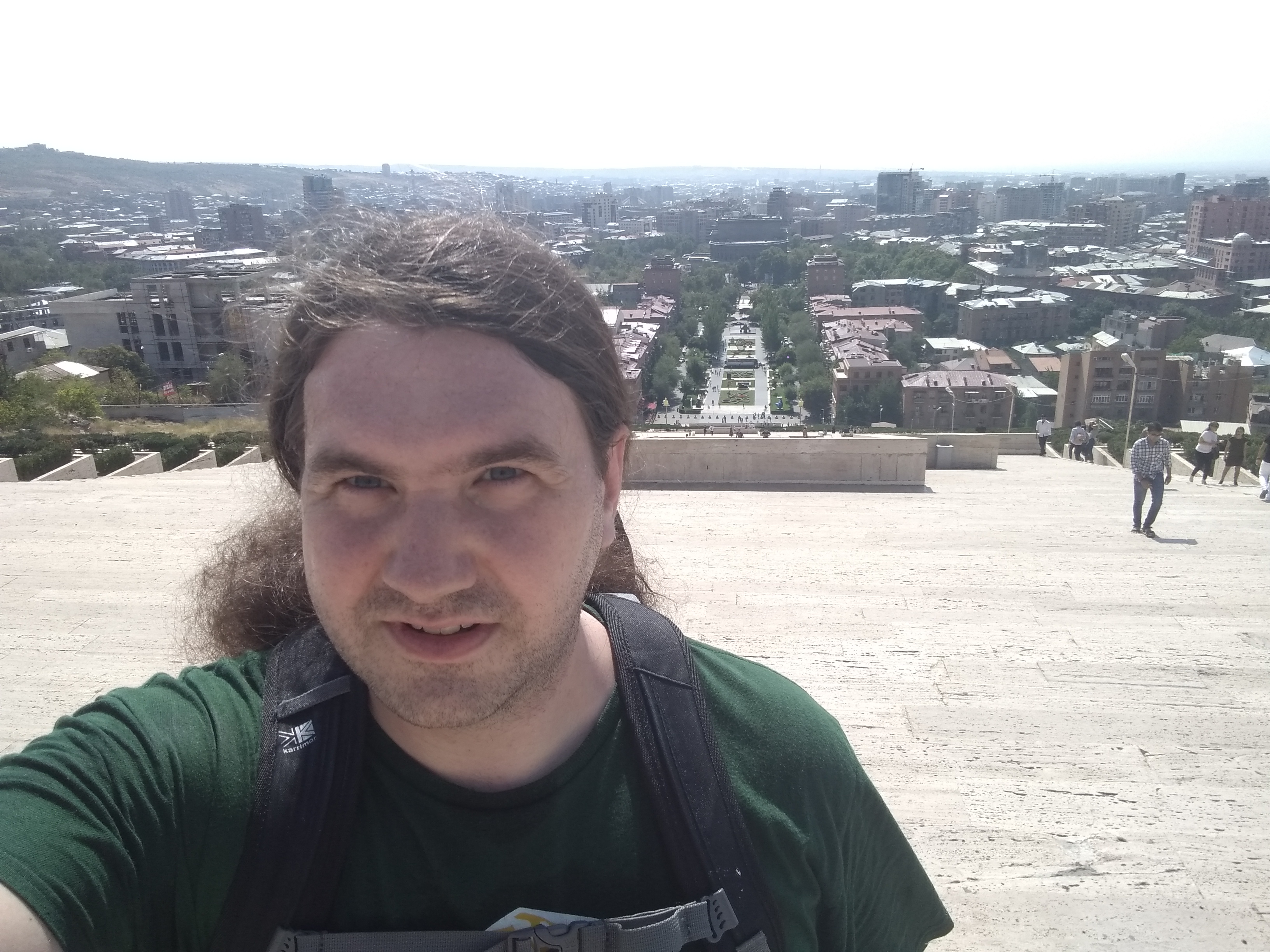 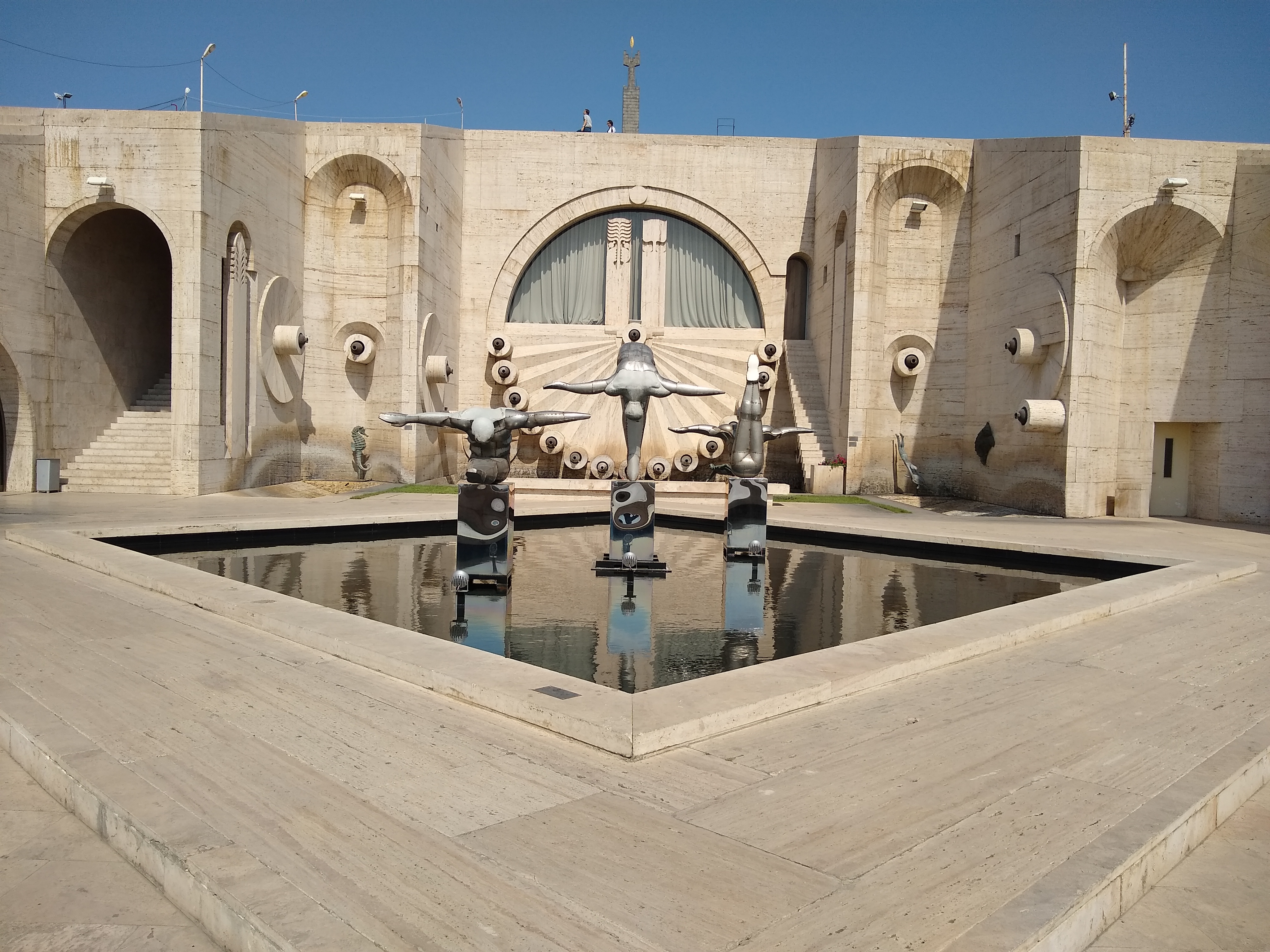 Figure 1: The Cascade Monument, an outdoor staircase at the Cafesjian Museum of Art which can be climbed to give an epic view over Yerevan. Clockwise from top left the view of cascade from the bottom of cascade showing the height of the monument. One of the art installations on the second level which is a sculpture of a man’s head. Another art installation (called Divers) on the fifth level of Cascade. My view from the top of cascade showing the view down the stairs and over Yerevan.

After reaching the top of Cascade, I noticed there was further upwards I could go to get an even better view of the Yerevan skyline. I took a path to the left from the top of cascade, which led to a road, and after walking briefly along the road, turned right to take a path adjacent to a construction yard. I could then walk along a precarious feeling metal bridge and up another precarious feeling metal staircase, after which I reached a very tall World War 2 memorial. From here I had an even more impressive view over Yerevan (Figure 2).

Figure 2: The monument commemorating the Great Patriotic War (broadly the Eastern Front of World War II) at the top of cascade (left) and The view over Yerevan from the monument (right). Although Armenia itself was not a theatre of World War II, Nazi Germany were attempting to invade the Caucasus to obtain control of the oil fields in Azerbaijan, large numbers of Armenians served in the Soviet military, many of whom died in combat, giving Armenia one of the highest per capita fatality rates in World War II.

After that hard work climbing, I decided I needed some food, and actually more specifically, some wine! I felt it most appropriate to celebrate Armenia's independence by imbibing in Armenian wine! I went to one of the restaurants at the bottom of Cascade which looked like it might sell wine (and indeed it did) and discovered that it was actually a Chinese restaurant! Okay, I suppose this isn't perhaps quite what I wanted, but the wholesome fillingness of noodles wasn't something I was going to turn my nose up at! And they had wine, which is what I really wanted, so what’s really the problem here! I have to say that my chicken with cashew nuts and chow mein I had was excellent though!

Heading back towards Republic Square I again passed the Opera House, the courtyard in front of which now had numerous sports on show (Figure 3), with uniforms and equipment in Armenian colours of red, blue and apricot. The colour orange (naranjaguin) is always called apricot (tsiranaguin) in the context of the Armenian flag, as this colour on the flag represents the apricot, which is the national fruit of Armenia. As well as sports popular in the west like table tennis and cycling, there were also sports like wrestling and arm wrestling on show, which interesting to see as an outsider, as it showed what sort of sports are popular in Armenia and how these differ to other countries. 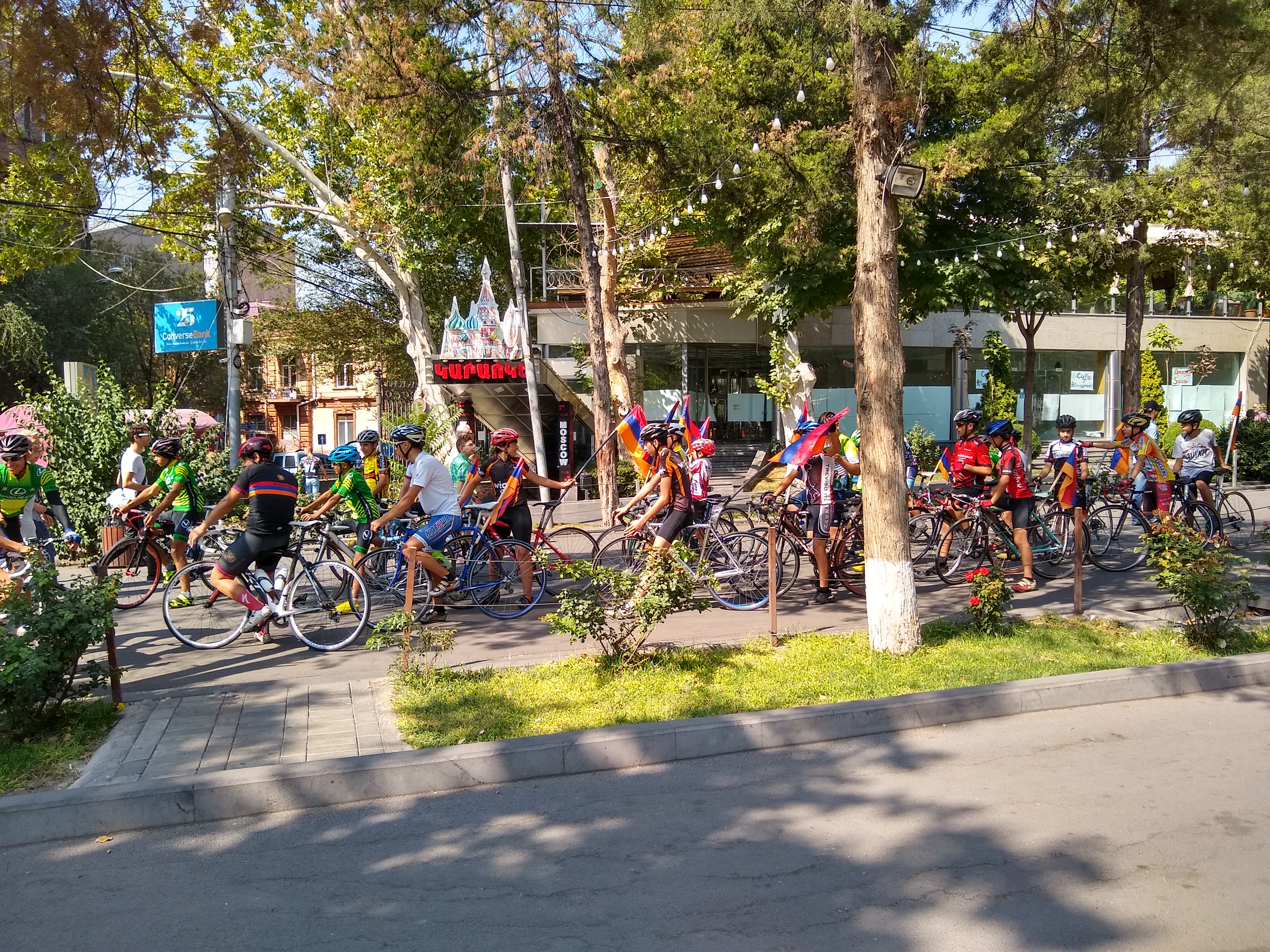 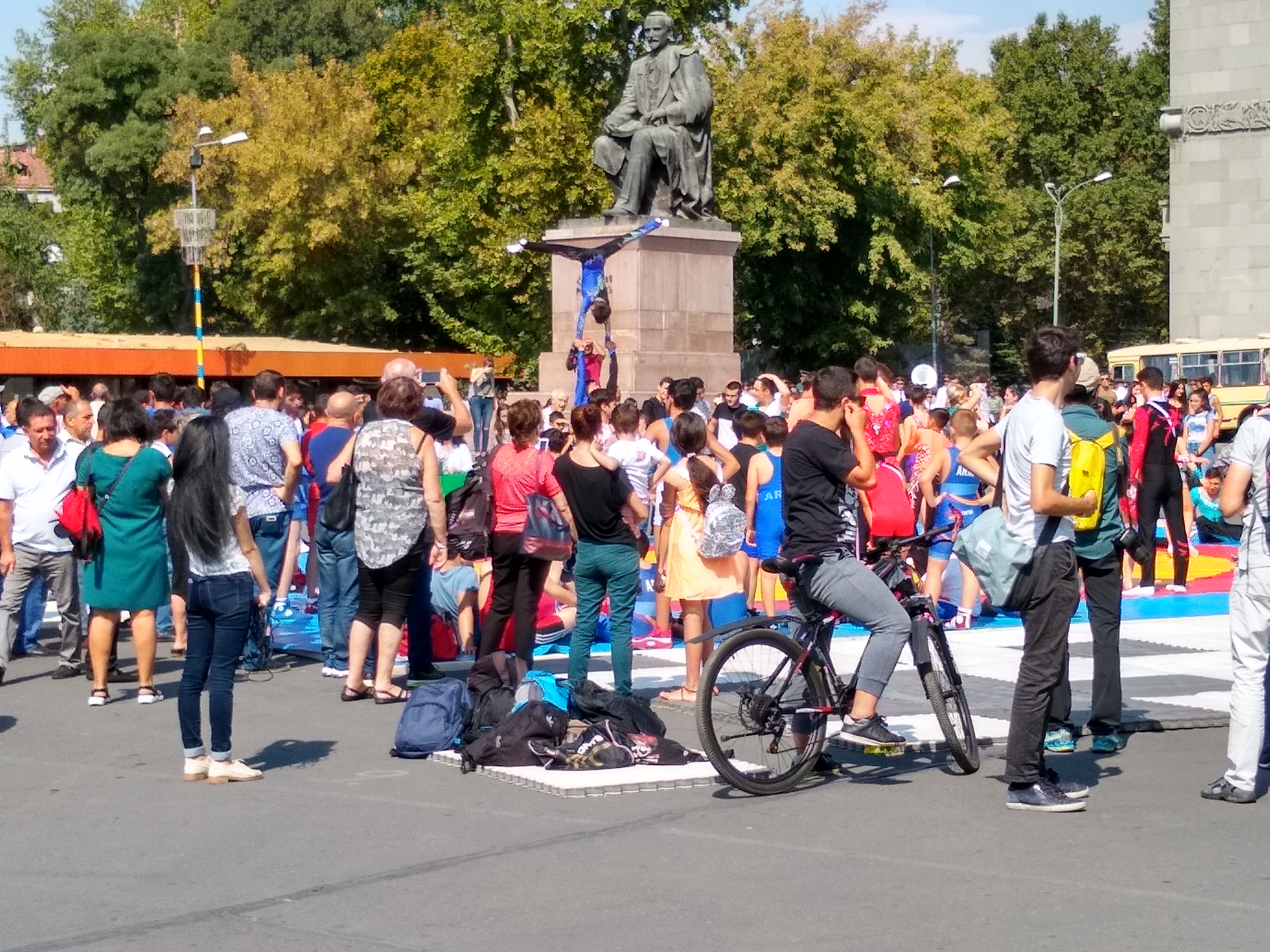 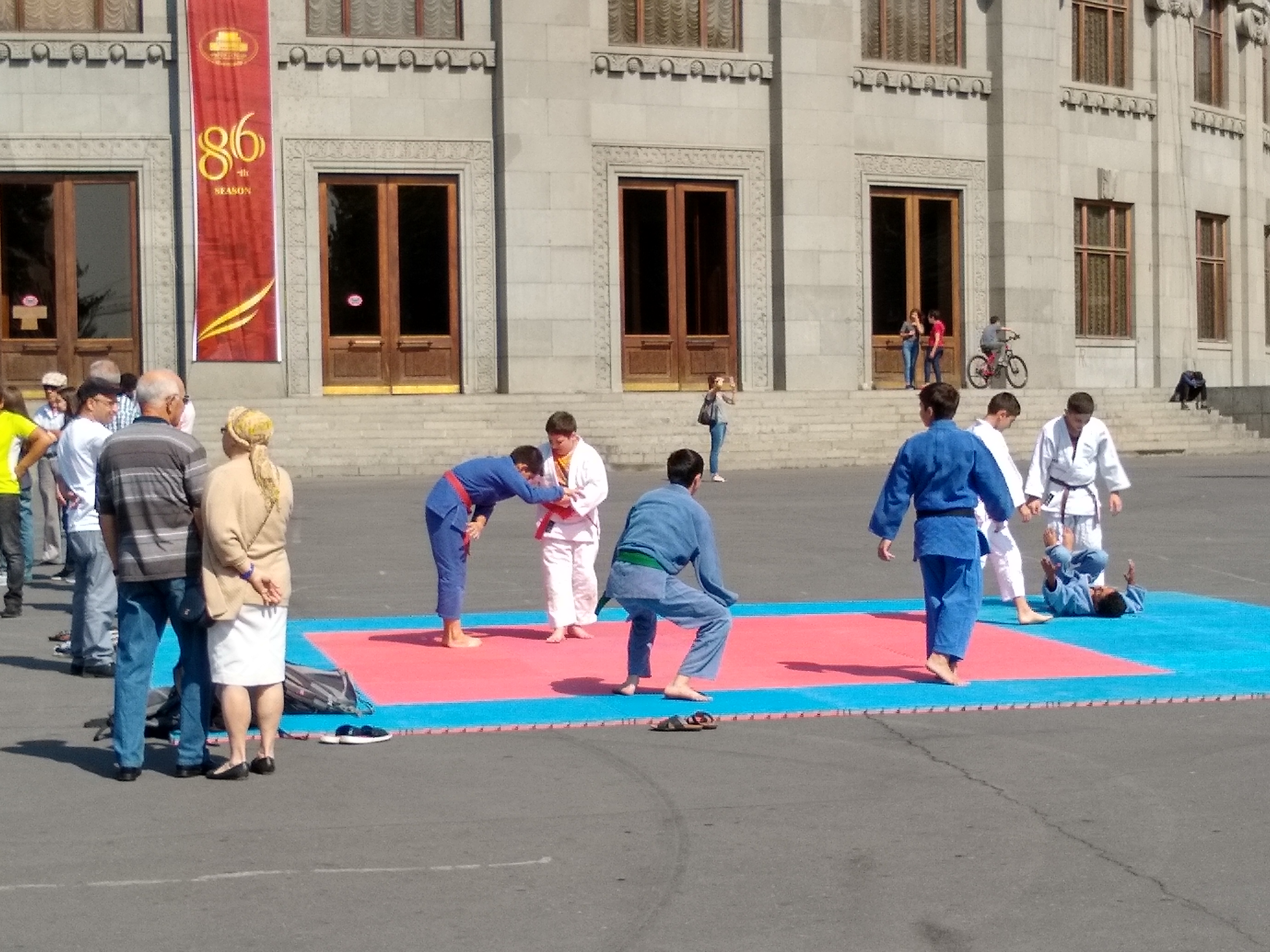 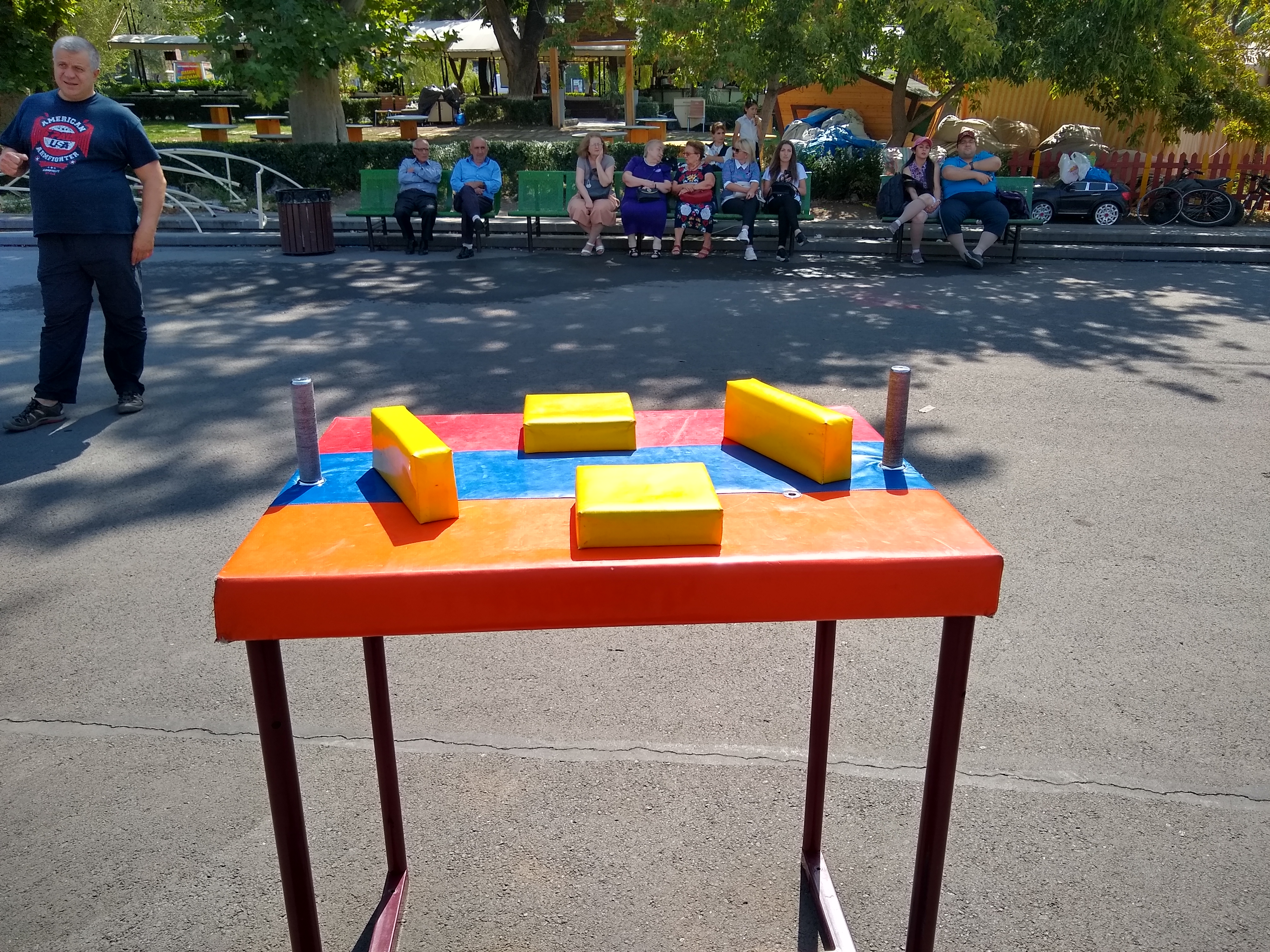 Figure 3: Sports on display in Yerevan outside the Yerevan Opera Theatre which used equipment and dress in Armenian colors. Clockwise from top left cycling gymnastics arm wrestling and judo.

Making my way back along Northern Avenue towards Republic Square, I saw a rather large camera pointing at me, which I thought was a bit curious. Turned out the operator was Jeffry, another volunteer from AVC! He was in Armenia writing a travel diary for an Armenian tourism website, which was a good opportunity for him to explore the country and take lots of photos, and of course the Independence Day festivities were a perfect opportunity for photographs of vibrant celebrations happening in Armenia.

I ventured with Jeffry towards Republic Square where the main Independence Day festivities were being held. Unfortunately I had missed the speech by Armenia's Prime Minister, Nikol Pashinyan, but throughout the afternoon there were artistic and cultural displays celebrating Armenian culture (Figure 4). There were not just Armenians in the crowds, I met several tourists, some of whom didn't seem to realize this was an Independence Day celebration and simply called it a "festival"! 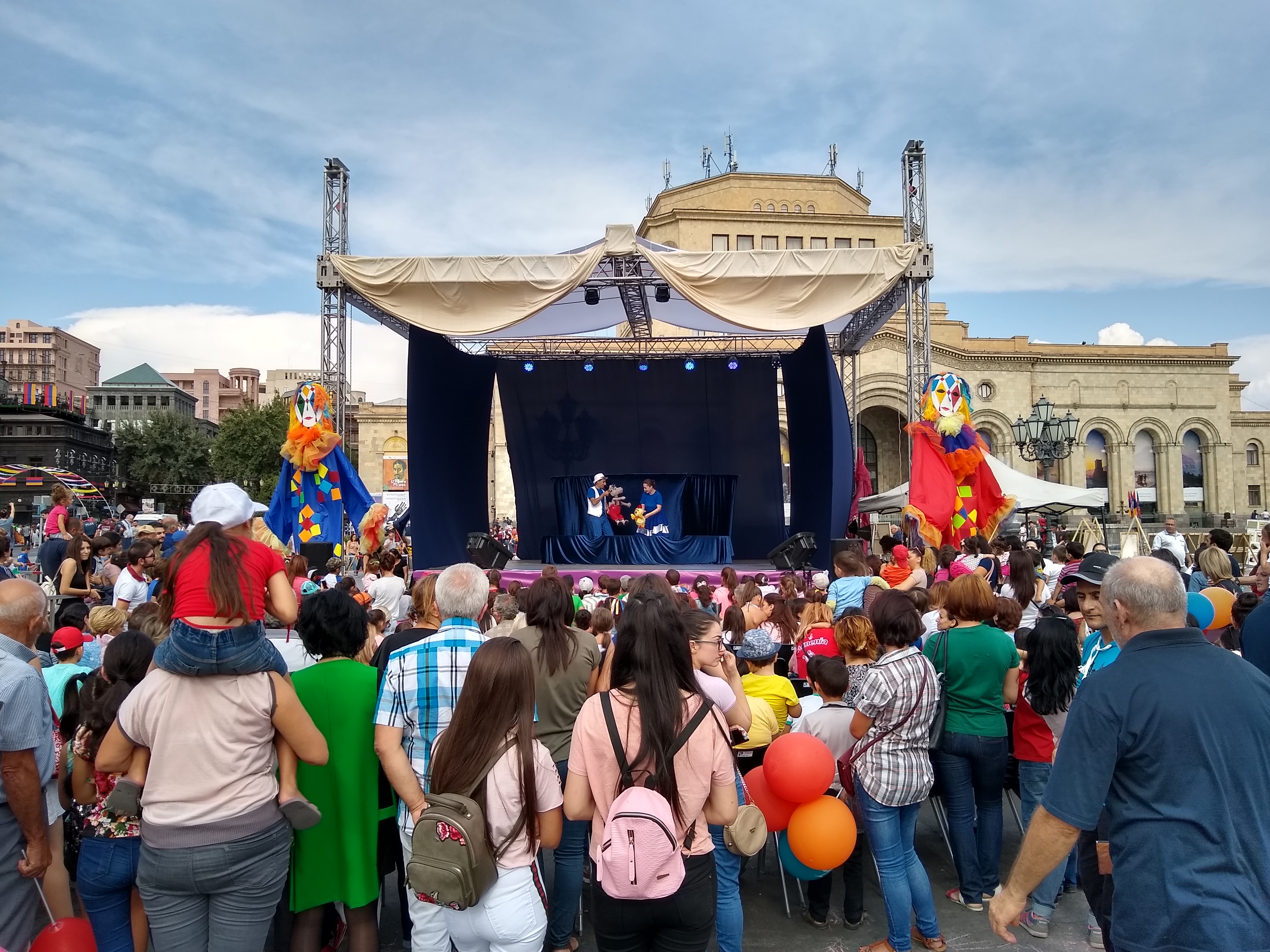 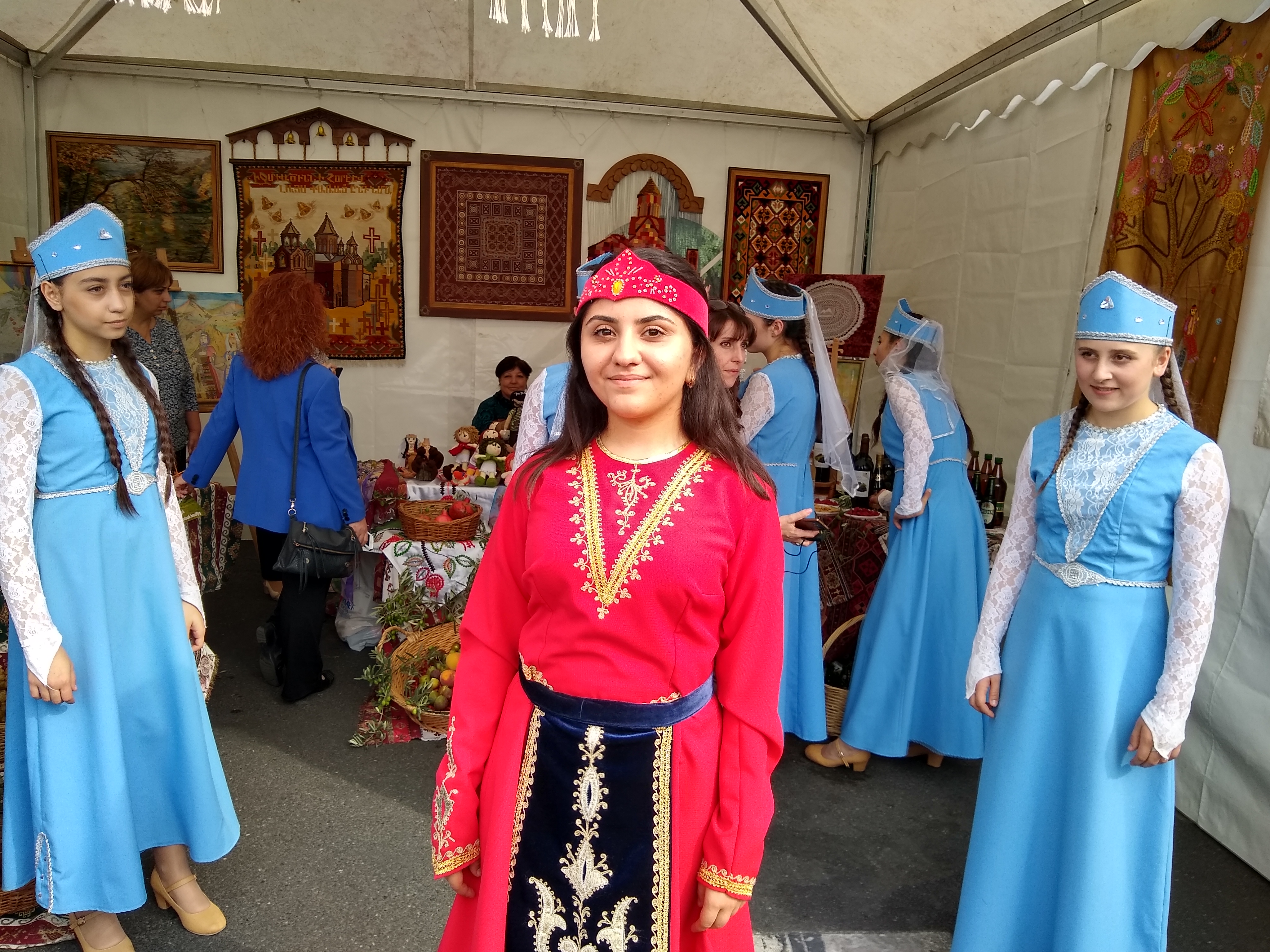 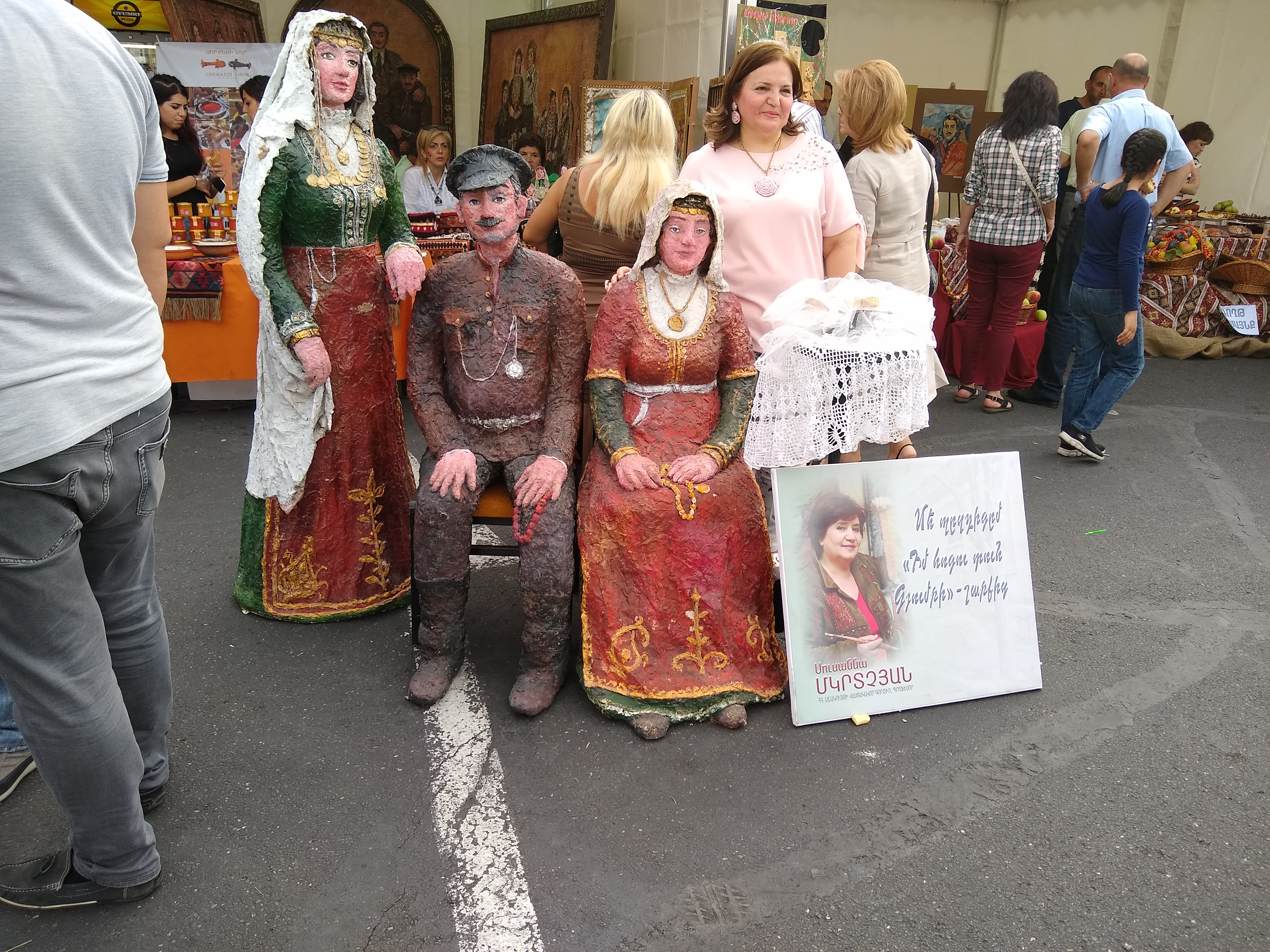 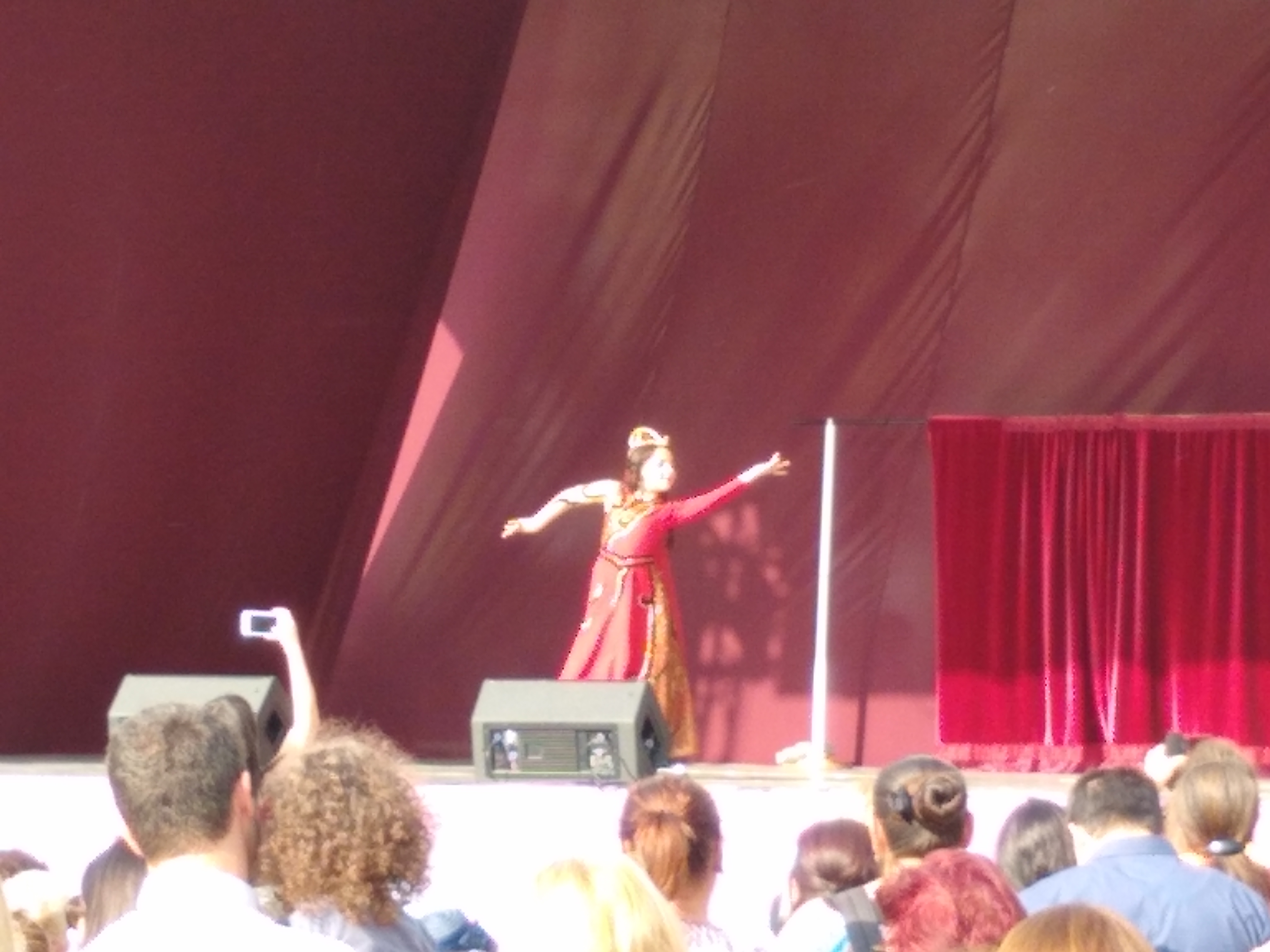 Figure 4: Some of the arts and cultural exhibits celebrating Armenian culture on Independence Day during the festivities in Republic Square. Clockwise from top left puppet shows traditional dress dancing and sculptures.

I later met up with some other Depi Hayk and AVC volunteers and imbibed in some of the Armenian food and drinks that stalls were selling. There were large quantities of wine, brandy and beer for sale, at very reasonable prices, so of course it was worth having some drinks! And there were lots of traditional Armenian foods for sale at the street vendors.

Later in the day, a couple of friends from Depi Hayk and I decided to get some food, and thus we went to Karas, which ended up being the usual restaurant I went to in Armenia, as it was cheap and good. Due to how busy the restaurant was, we joined a group with an Indian man in order to be seated sooner and we had a nice chat with him in good company. He offered to cover the whole table as he was happy to meet us, and he felt like celebrating his birthday! He told us that he was in the tourism industry and was in Armenia setting up a hotel for his business. India is developing closer relations to Armenia as part of India’s growing influence in the region and globally, especially as India is developing closer ties to Iran, who also have close ties to Armenia.

It was also this time when I had 2 new culinary experiences. Firstly I tried khinkali for the first time. Khinkali are Georgian dumplings, which just like another Georgian dish, khachapuri are popular in Armenia as well. Khinhali are delicious, soft dumplings where the dough has been twisted together to a single point and stuff with meat and vegetables. I also tried tan here for the first time. Tan is a yogurt based drink, which is often salted, to create a light and refreshing slightly sour and salty drink. Much more refreshing than milk, this was a delicious drink to accompany Armenian food and this was my staple drink when I ate in Karas subsequently. Since leaving Armenia I regularly make Tan owing to its deliciousness, and it is very easy to make, you just need plain yogurt, a bit of salt, and top it off in a glass with cold water.

Something I noticed about Armenian nationalism during the Independence Day celebrations, and generally during my time in Armenia is that although Armenia is an ethnically and culturally homogenous country, Armenian nationalism more resembles a civic nationalism that celebrates its culture and history. This is as opposed to an ethnic nationalism that celebrates a racial identity associated with the nation. I found this was evident as wherever I was in Armenia, that although I wasn't Armenian, I never felt unwelcome anywhere I went. Armenians though are very proud of their history, and are keen to share their culture with others.