While I was at Smabataberd I got a text message from Arsen Arakelyan, my supervisor at IMB, asking would I like to join a Sunday day trip he was organizing for his collaborators from Leipzig to Dilijan. Of course wanting to see the country I accepted, even though we were super late getting back from Smabataberd the night before!

Unfortunately that morning there had been a fire in the main road tunnel to Dilijan, so we couldn't go there, instead we'd go to Tzagardzor and Lake Sevan. Rather than with AVC and Depi Hayk, this was with Arsen, Siras, Maria and Diana from the BIG group at IMB, along Henry and Edith from Germany, the instructors of the R course. In a minibus we went along one of Armenia's major roads, the Yerevan-Dilijan-Sevan highway towards Tsaghkadzor, although this main highway is considerably smaller than British motorways or Ontario 4 series roads, unsurprisingly as traffic volumes are smaller.

Tsaghkadzor is Armenia's ski resort, which is popular with Russian tourists. Although Armenia is nearly in the Middle East, a notorious desert region, it still gets considerable snow in the winter along ski resorts like this to run. However as I was there in September/October it wasn't snowing, but still, the facilities of the ski resort were still there and open, including access to the ski lodge at the summit, and the ski lift. This gave rise to my first go on a ski lift! Now, I'm scared of ferris wheels, so this was a daunting experience for me! I got on the ski lift with Maria (Figure 1), we quickly locked the bar into place and then rose above the trees as we went up the mountain! It was quite a spectacular view, but still I'm not so keen on the ski lift!

Figure 1: This was my first ride on a ski lift, which was without snow, although Tsaghkadzor is a ski resort in the winter. It was a daunting experience as I am not comfortable with heights, in that I'm scared of ferris wheels! Maria my colleague from IMB on the other hand was much happier on the ski lift!

At the top of Tsaghkadzor we had a coffee at the centre and took part in some shooting with airsoft guns (Figure 2). This was quite a fun experience and I started getting a knack for it, after being shown how to aim it properly and to position myself. However midway through my shooting I suddenly lost the knack for it and started missing, but I regained my composure and started hitting the cans again, thus I was not designated as the battalion doctor. 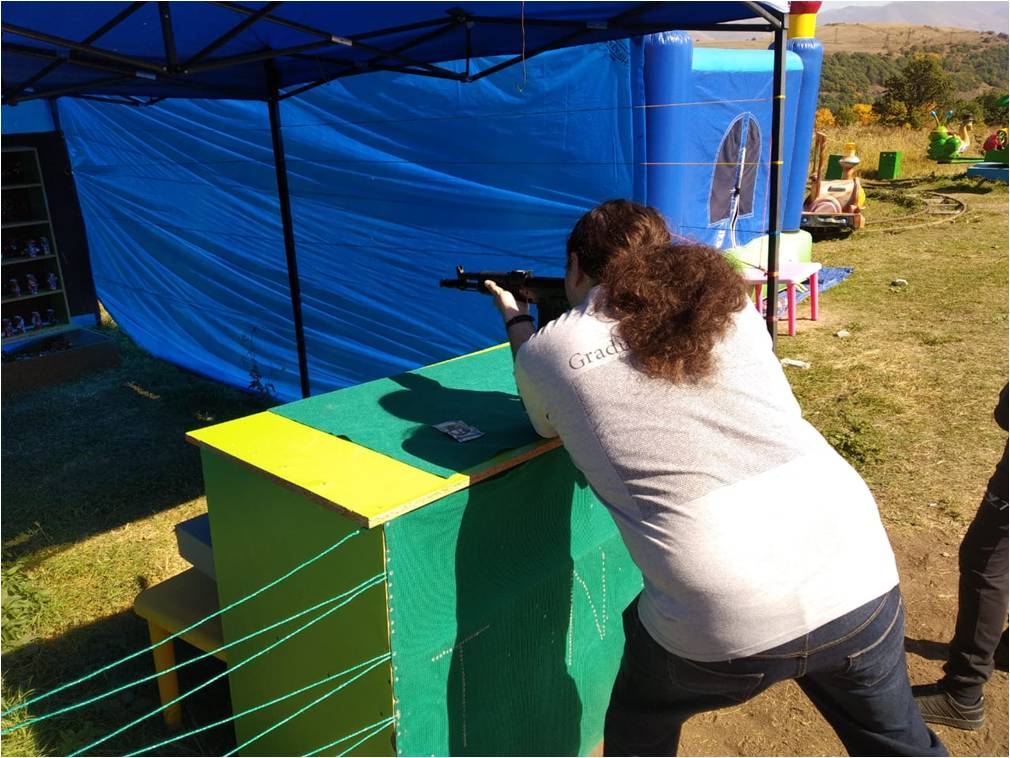 Figure 2: Having a go at shooting airsoft guns at cans. I got the hang of it once I worked out how to aim the gun (there are a number of different bits you can use to sight) so I was not designated as the battalion doctor.

After riding down the ski lift back to the car, we headed from Tsagadzor to Lake Sevan (Figure 3). Lake Sevan is the largest lake in Armenia and the Caucasus with a surface area of 1,242km2, as well as one of the world's largest high altitude lakes, at 1,900 m above sea level. The area around Lake Sevan resembles a Mediterranean Riviera, with lakeside restaurants and market stalls, so this serves as a something resembling a seaside resort in Armenia. Like Tsagadzor, this is another popular area with tourists and visitors to Armenia. Additionally, the lake provides much of Armenia’s seafood, with trout in particular being popular. At Lake Sevan is also the Sevanavank Monastery (Figure 4) which dates back to the 9th century. Two churches still stand at the site of this monastery, which is located on the Sevan peninsula. The peninsula used to be an island, but as the level of the lake was artificially lowered during the Soviet era by 20m it became a peninsula when a small land bridge was formed.

Figure 3: Lake Sevan from the Sevan resort, which is a riviera area on the shoreline of a large lake, similar to the area around Lake Geneva. This is a popular tourist area with restaurants and water sports activities available here, it is also economically important for Armenia, as a majority of Armenia’s fish comes from the lake. The water is also very clear, which is beautiful.

Figure 4: The monastery of Sevanavank on the peninsula at Lake Sevan. At one time this monastery was on an island, but due to drainage of the lake during the Soviet era for agricultural and industrial projects, dry land was exposed and the island became a peninsula.

The day finished with a meal at a restaurant by the lakeside. In true Armenian fashion, this was a large banquet of an assortment of dishes. Two kinds of trout were served, trout wrapped in lavash and baked, as well as grilled trout, and an assortment of other salads, pickled vegetables, breads and spreads (Figure 5). I especially enjoyed the pickles, and this was the first time I had tried pickled string beans.

Figure 5: Our meal after visiting Lake Sevan had lots of fish, vegetables, meats, and cheese along with lots of lavash to serve it with. In traditional Armenian style, there was lots of food for everyone from lots of shared dishes. A particularly memorable dish from this meal was the trout, which was wrapped and baked in lavash, and the pickles, which were delicious.

It was a nice way to see some of Armenia's tourist attractions, as well as get to know my colleagues from IMB. Plus my first experience of a ski lift was quite exciting!