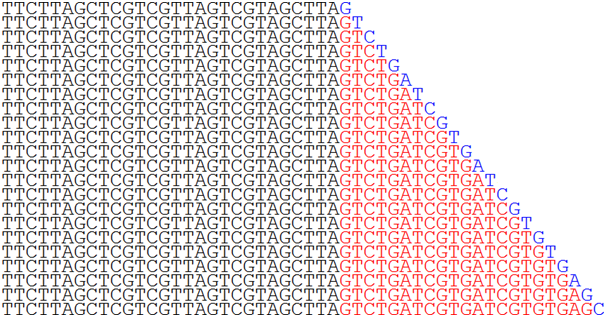 Figure 1: Elongation of the DNA strands during sequencing. The sequencing elongates from the primer (black) by incorporating new nucleotides (red) into the growing sequence. When there are di-deoxynucleotidetriphosphates (ddNTPs) in the reaction mixture, these can be incorporated instead of the nucleotides. As the ddNTPs do not allow further elongation of the DNA, this terminates the elongation. These sequences can be separated by size and the order of the DNA fragments corresponds to the DNA sequence. If the identity of the ddNTP incorporated can be determined, which is usually by attaching a fluorescent dye to them, this can be detected and used to detect the sequence of nucleotides.

This method was originally implemented with different ddNTPs corresponding to each of the nucleotides, and 4 reaction mixtures and only one form of ddNTP in each reaction mixture. These reaction mixtures would then be separated by agarose gel electrophoresis in 4 wells and the pattern of bands would indicate the DNA sequence. However the modern method attaches a different dye to each ddNTP and a single reaction mixture can be used. After the reaction, instead of being separated on agarose gel in multiple lanes, these can be separated by a single capillary gel. Due to the fluorescent tags, these can be detected by a laser detector. The rate at which the DNA fragments migrate through the capillary tube corresponds to their size, with smaller fragments migrating first. This means that the fastest migrating fragments are those which have had ddNTPs incorporated earlier, which means they are read from 5ꞌ to 3ꞌ, as this is the same order that the sequence elongates in. If the dyes attached to the ddNTPs are specific to the identity of the nucleotide that they replace, this means that each colour will correspond to a particular nucleotide, meaning that the series of colours indicates the series of nucleotides. 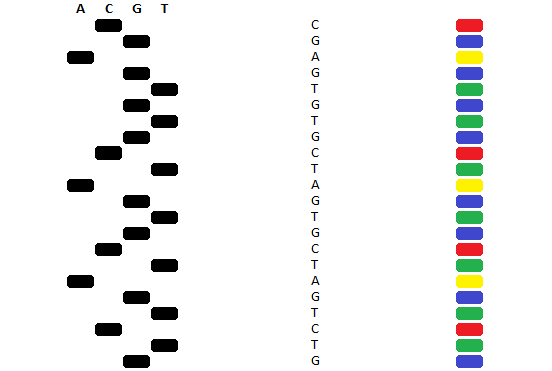 Figure 2: Deriving nucleotide sequences from Sanger sequencing. Smaller DNA fragments migrate fastest, so either separate reaction mixtures containing unique ddNTPs can be used (left), as in the antiquated original method of Sanger sequencing, or fluorescent labels attached to each ddNTP (right) can be used, meaning each nucleotide is indicated by a unique colour and a single lane (which is usually a capillary gel) can be used. In both cases, because the shortest fragments migrate fastest, the sequence is read from bottom to top.

Figure 3: Schematic of the DNA fragment following tagmentation. The DNA fragment has at each terminus an adaptor ligated to it. This is used to attach the terminal sequences (which allow the fragments to bind in the flow cell), the indices (which identify the sample fragment during subsequent data analysis) and the primer binding sites (which are where elongation during sequencing starts) are attached to these adaptors.

Fragments are passed through a flow cell. This contains oligonucleotides (short pieces of DNA), which are attached to the flow cell. When the tagged DNA fragments enter the flow cell, they attach to these oligonucleotides via the terminal sequences of the tags. This binding takes place through complementary base pairing. Once the fragments are bound, a process of “bridge amplification” occurs. In this, DNA polymerase produces double stranded DNA from the fragment and the oligonucleotides in the flow cell, thus producing double stranded DNA with terminal sequences at either end. The original fragment sequence is discarded, and the other end of the single stranded DNA binds to another oligo forming a bridge. DNA polymerase then moves along this bridge, forming new double stranded DNA, with both ends attached to the flow cell. When the complementary pairings between these sequences dissociate, this leaves two strands from the original sequence fragment, doubling the amount of DNA that can produce signal in the later sequencing steps. As both of these strands can form other bridges with other unattached nucleotides, this step can be repeated over and over again to form clusters, which amplify the signal. As the cluster expansion process produces both forward and reverse strands, the reverse strands are removed before sequencing commences.

Once the clusters have been sequenced, these produce sequence contigs. These are short fragments of sequence that were produced during the random breaking of the fragments at the beginning of the sequencing process. This is in contrast to Sanger sequencing, where a single sequence covering the entire sample is produced. These contigs are overlapped using the analysis software to produce a sequence, or they can be aligned with a template sequence, which would be the case if the sequencing is being used to detect variants, as in gene panels.